I have to admit to thinking that the shale gas revolution would be trouble for any and all options of making monomers and other chemicals from biobased materials. With a suddenly-cheaper, petroleum-based feedstock, int would be a foul financial environment in which no new investments in biobased chemicals would be made and existing investments would possibly struggle to continue.

But a new paper suggests that not only might shale gas not hurt biobased chemicals production, but it might even be a boon to it. While the authors discuss a number of reasons why, this one plot is most telling: 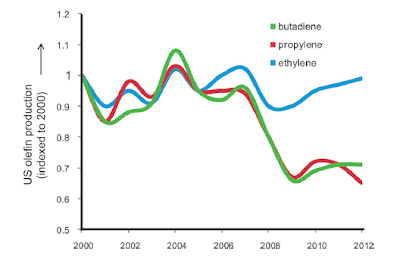 I certainly knew that shale gas would go a long ways towards increasing ethylene production, but I had no idea that it would come at the expense of propylene and butadiene. And that's where biobased chemicals can make a difference. The authors discuss routes for biobased production not only of these chemicals, but other outputs as well (such as BTX) that are expected to become scarcer as more retrofitting is done to access shale gas rather than the traditional naptha feedstock.

There are enough specific companies named exploring these options that it is difficult to call this article a pie-in-the-sky dream radiating from an Ivory Tower. It does tend to focus on drop-in replacements for existing chemicals, which is both good and bad. Good in that it is easy to find markets for the outputs since these chemicals are commodities; bad in that it keeps us focused on using monomers (and other chemicals too!) that were the natural fallout of crackers, rather than those that are the natural fallout of biochemistry, such as furanics. Petroleum-based furanic-based polymers are terribly expensive, while those that are biobased are (or more correctly, have the potential) to be inexpensive, and we certainly haven't explored all the materials that we can make with these unique monomers.

Nonetheless, the idea that shale gas could help establish a biobased-chemical economy is a counterintuitive, but compelling idea. As the report states:

"It is often said that the Stone Age did not end because we ran out of stones and that the age of oil will not end because we run out of fossil fuels. Ironically, one might indeed even think that the large-scale utilization of an unconventional fossil resource, such as shale gas, may usher in a new era of a more sustainable chemical industry that produces—at least in part—some of its main bulk chemicals from biomass."