SoBe, What Were You Thinking?

I can see environmentalists being angry with SoBe's latest ad campaign, as it plays on the old idea of "message in a bottle".

The only problem: SoBe's bottles are plastic. While SoBe is obviously not suggesting that people toss their plastic bottles in the ocean, the association is something that just should be avoided. Especially when it's one of the ads showing up on the Facebook page of an leading advocate fighting against ocean plastic, Stiv Wilson. 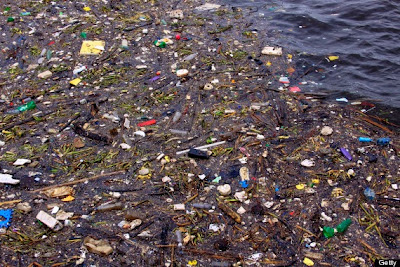 Unfortunately, the Huffington Post article cited above makes its own mistake using the picture on the right as representative of plastic in an ocean gyre. Ironically, it's almost too bad that the pollution isn't that bad. A scene such as this could be economically cleaned up and the recovered material could be reused to make some new products. Sadly, that is not the case with ocean plastic. 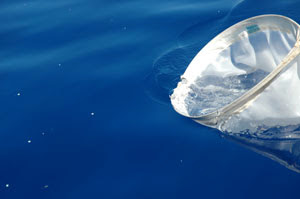 The picture on the left was take by Scripps Institute researchers and shows what plastic in an ocean gyre really looks like. It exists in such dilute concentrations (and such small particles) that economical recovery operations are just not feasible. Such a picture, despite being factually correct, makes it much tougher to sell the idea of pollution to the public. Presenting it as an "island of plastic" that is (twice) "the size of Texas" is much easier and brings out more revulsion from the public.

As I have said numerous times over the years, plastic waste has no business being in the ocean. The romantic, old idea of a message in a bottle does nothing to help matters and shows an insensitivity to a very large environmental issue, one that is a serious problem in its own right, but also one that decreases the public's respect for the plastics industry. SoBe really needs to rethink the ad.
Posted by John at 10:51 AM