The Skin Off My Back

I've never posted a NSFW entry before, but after doing over a thousand posts, maybe I'm allowed a little slack. Don't worry; you'll have to scroll down a bit before you get to the fleshy parts. (Ooh, ooh! Tell me you can't wait! Just make sure you aren't reading this too close to your lunch hour. I don't want to be responsible for you losing either your appetite or your lunch. I told you it's not safe for work)

Last weekend, I was cleaning out the garage (or garage for those that speak British English) and I came across a box of 'work' stuff that I had forgot about. There were 2 things in particular in that box that caught my attention. One I will write about today (the fleshy one); the other will be written about in the future.

One more than one occasion (here and here), I've blogged about how at my previous employment gig, I literally gave the skin off my back to help with a client's project. The project was the development of a medical adhesive and the best way to test the performance of any medical adhesive is on human skin. The part of the human body most often used for testing is the back as it is large and fairly flat. And since asking for volunteers gets messy for a number of legal reasons [*], I had someone put strips of the new adhesive variations on my back and pull them off (using an Instron to measure the force). Some stuck more than others and some were rather painful; hence the skin off my back remark.

This is all well and good, yet I never submitted any proof to my readers that this actually occurred. But that box had a CD with pictures of the whole ordeal. And here they are. 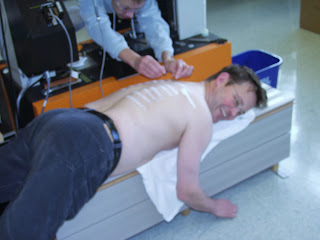 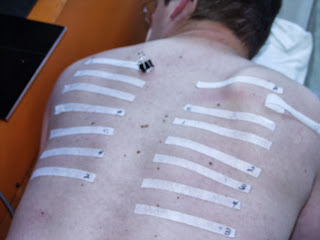 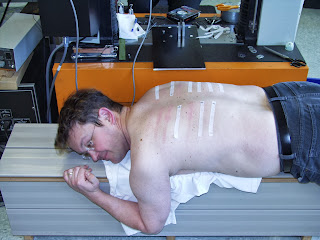 My skin grew back of course, since it truly is a "SELF-HEALING" material (unlike what we saw yesterday).

The dynamics of this project were a little unusual. The client was buying an adhesive from a large corporation, one about a thousand times bigger in sales than us. The client loved the adhesive that I developed, but they never bought any from us. They just used it as leverage to get a price break from the big guy. So it goes.


[*]The Nuremburg Code, was developed after World War II and closely regulates human experimentation to ensure that all human subjects are voluntary and give informed consent.