It's well known that adding "stuff" to polymer solutions alters the viscosity. Whether that "stuff" is inert fillers (spherical, rodlike or othewise), (co)solvent(s), or anything else, the viscosity of the modified solution will change to some degree. But keep in mind that this "stuff" that I'm referring to are what physicists call condensed matter - solid, liquids and anything else in between. Anything but gases. 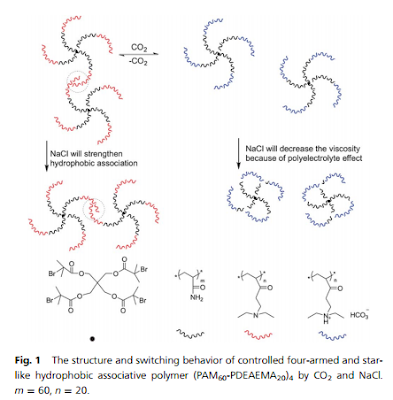 A new paper in Polymer Chemistry changes that. Canadian researchers have developed an aqueous polymer with a viscosity that is strongly modified after dissolution of CO2 in the water. [*] The top row on the right hand figure (along with the decoder ring at the bottom) shows the chemical makeup of the polymer and how the polymer-polymer interactions are affected by the CO2. Recall that dissolved CO2 in water acidifies it via the formation of carbonic acid (H2CO3). The acid then interacts with the basic, tertiary amine. Not surprisingly, salts (NaCl in this case) also cause havoc at the same sites, either amplifying or further reducing the effective interactions. 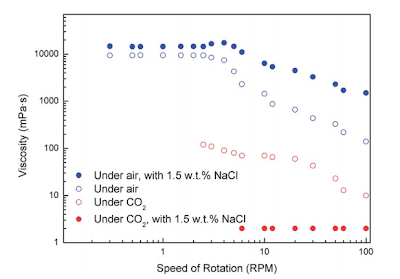 The impact of changing these polymer-polymer interactions on the Brookfield viscosity is quite large as this next figure shows. In the absence of salt, the dissolved CO2 knocks the viscosity down by a factor of 100, and the addition of salt takes it down by almost another factor of 100. (For reference, water has a viscosity of about 1 mPa s, while honey would be on the order of 10,000 mPa s.)

The paper has more details about concentration affects (for both the CO2 and salt), and also shows that these changes are repeatedly reversible as sparging the solution with nitrogen brings back the original viscosity. While this polymer was specifically designed to maximize the impact of the carbonic acid on the viscosity, it wouldn't surprise me to learn that other aqueous, ionic systems could also be similarly affected, although most likely to a much smaller degree.

[*] To be clear, this paper is not proclaiming the initial discovery of gases strongly modifying viscosity. Previous research exists, but this is the first time I've become aware of it.
Posted by John at 9:01 AM