Talking Turkey (Netting, that is) 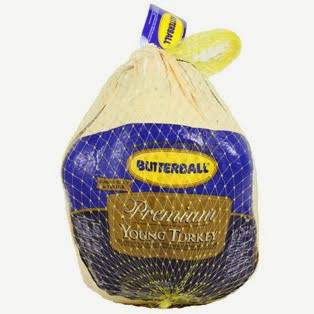 I expect readership to be down next week with the Thanksgiving Holiday, so today will be the day to talk turkey. More specifically, the netting that surrounds the turkey when you buy it at the store. Unless you have worked in the manufacturing of plastic netting [1], you WILL take that netting for granted. Don't. It is far more sophisticated than you realize. Take a look at the netting closely. It is a continuous tube, and there are two layers of strands in the netting. It stretches in both the x- and y-directions and is perfect for conforming to the odd shape of a cleaned, plastic-wrapped turkey and most importantly, it forms a nice handle so that you don't have to bearhug the thing with both arms.

The process for making diamond netting is known as the Netlon process. According to one source, it is only the ninth basic textile process since the dawn of civilization. The inventor, Frank Mercer, became not only a Fellow of the Royal Society, but was also OBE and won numerous other awards from Her Majesty for this revolutionary process.

The Netlon process is fun to watch in action, and really pretty simple, although much more difficult to describe. (Sadly, I can't find an online video showing the process.) Let me describe it this way. Much like pushing Play-Doh through the Play-Doh Fun Factory to make Play-Doh worms, molten plastic is extruded through 2 slotted dies which produce continuous strands of the plastic. The slots are located in a circular pattern around the dies, and most importantly, one die is located within the other one and along the same axis. This is what produces the 2-layers of the net. However, what I've described so far would only produce long strands of fiber and not netting. The netting is made by taking the dies and counter-rotating them. The plastic is molten enough that the two strands meld together where they cross. If both dies rotate at the same speed, a tube of netting with the lovely diamond pattern is produced. This diamond pattern is what gives the netting its biaxial deformability even when the plastic itself is not stretchy.

This is not the only process for making plastic netting. There are others, but the netting they produce are not as appropriate for wrapping a turkey. They generally don't deform as well (unless made of fundamentally elastic material) and are seldom made in a tubular form. They are another subject for another day. As for today, I hope you have a better appreciation for that little bit of netting that's around the turkey. It's also likely around the onions that were used in the stuffing [2], and caramelized for the haricot verts salad [3] and the gravy and the...

[2] Of course we stuff our bird even as the TV news always tells us not to. Why don't the same TV news crews do live shots from outside a hospital on the day after telling us how many people were treated for food poisoning that came about because they stuffed their bird? Because there aren't any.

[3] The only way I will eat green beans is in my wife's haricot verts salad. Caramelized onions, beans, toasted pine nuts and a spoonful of creme fraiche. Simply incredible and it pairs so well with turkey and chicken.
Posted by John at 9:21 AM

Email ThisBlogThis!Share to TwitterShare to FacebookShare to Pinterest
Labels: extrusion