Every once in a while, I run across a journal article where the title completely underwhelms me. Such as this one: "Strong dynamical effects during stick-slip adhesive peeling".

If you know what stick-slip adhesive peeling is (and as you'll see in a moment, you already do know), then you know it is a highly dynamical phenomena. Stick-slip peeling is what happens when you pull a piece of pressure-sensitive adhesive off the roll and it makes a loud noise. Here in the US, regular old-fashioned Scotch Magic tape (the one used around the home and office, and also for wrapping Xmas gifts) is pretty quiet, but compare that to the clear tape used to tape up boxes for shipping. That noise is at most a minor inconvenience at home, but imagine that you have a factory full of automated box taping machines that are all running and making that stick-slip noise. Now you have have an environmental hazard where workers need hearing protection. All because the tape won't peel off smoothly, but instead behaves in a highly-dynamic fashion of peeling for a little bit, then stopping, then starting again, then stopping...

So to say that there are "strong dynamical effects during stick-slip adhesive peeling" is stating the obvious. The research results, however are not. 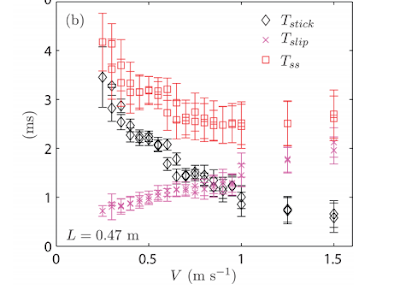 Using a high speed camera, the researchers [*] built on existing research, redocumenting a number of well established phenomenon, such as that amplitude of the stick-slip length increases with the pulling speed and that the stick-slip cycle time decreases with the same. But what they also unexpectedly found was that the time for the stick phase (Tstick) and the time for the slip phase (Tslip) varied independently of each other. (Tss is the total cycle time = Tstick + Tslip.) Depending on the peel speed, either phase could dominate the total cycle time, which makes it all the more challenging to attempt a reduction in this phenomena. This discovery is way beyond current theory.

Earlier in my career, I spent a lot of time on adhesive development which can be plenty challenging in its own right. I knew of "issues" in stick-slip, but never worried about it as long as my new rolls of tape could be unrolled. But clearly the whole arena of stick-slip is a fascinating area to research. Many people already know about the triboluminescence that can be seen from peeling Scotch tape from the roll quickly (do it in a dark room with your eyes well adjusted to the darkness), but you may also recall that half a dozen years ago, researchers found that the stick-slip phenomenon can lead to the generation of x-rays.

If I ever get back into adhesive research, I think I might spend a little time poking around in stick-slip behavior. There is undoubtedly much more to be discovered.