A Chemical Mystery - Can You Solve It?

My wife and I were able to use our chemical knowledge this past week to solve a perplexing problem. I'll post first what we observed and then let you try and figure it out.

We have a gas cooktop in our house here in Minnesota. A couple of weeks ago, the flames on it started burning more orange-like so we called in a repair guy. Non-blue flames are indicative of a rich fuel/oxygen mixture, one that can potentially put out CO, although it is less of a danger for cooktops than furnaces as the former are used for shorter periods of time often with the vent fan running too. But in any case, the regulator was failing and instead of feeding 3-4 inches water column of gas, it was feeding 6-8. A new regulator was installed and the pressure of the gas was reduced to the normal levels, but the orange flames persisted.

We tried adjusting the Venturi openings that let the air into the burners, but that didn't do anything. Besides, it would be freaky odd for all four burners to suddenly have their Venturi openings block at the same time. And then my wife (a Ph. D. in chemistry) found the solution, one which we have been able to positively confirm: by making an adjustment elsewhere in the house, we can on demand change the flames from blue to orange and back again. Neat, huh? And we also know now not to worry about the color of the flame.

Here's some other information that may or may not be helpful to finding the solution. The house is in Minnesota and is sealed up tight for the winter (it was -16 oF this morning!). Since the air is so dry, we run ultrasonic humidifiers in a couple of rooms in the house. About the same time as the problem occurred, we brought a real Christmas tree into the house. We have a dog (a Welsh Terrier), and had house guests staying on and off over the past few weeks. To make meals easier on the cook, we have been using a crockpot (electric slow cooker) a lot the last few weeks. We have hard water and soften it. Speaking of water, we have a gas water heater. Speaking of gas, we have a gas furnace and we also have a gas fireplace on both levels of the house.

With your knowledge of undergraduate chemistry, you now have enough information to solve the "Mystery of the Orange Flame". I will also tell you that the answer has nothing to do with polymers science so to make up for that, I've included a picture of a cute kitten playing with a random polymer coil. (If we had cats at our house (we never will), they would play with random polymer coils and not balls of yarn.) 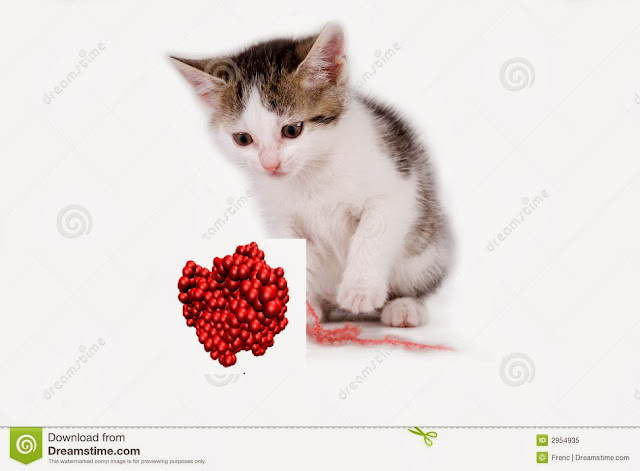 Why are the flames on the cooktop burner orange and not blue? Start with the water softener. It replaces the calcium and magnesium in the hard water with sodium. That water then goes into the ultrasonic humidifiers. (Distilled water would be a better option, but since these things go through gallons of water a day, it isn't too practical of an option to be trucking in that much distilled.) The humidifier then tosses the sodium into the air where it spreads through the house. Some of it ends up in the feed air to the burner where it burns it's characteristic yellow. Combine that small amount of yellow with a rich blue flame and you get an orange flame.

My wife then found a video that shows these changes in a most dramatic fashion:
Ignore the audio in the video, as it gives a wrong rationale for the color change. Just look at the pictures. Just that tiny bit of sodium is enough to significantly color the flames.
Posted by John at 9:14 AM

In your video you mention silver as the source of the orange color, but in your write up you say sodium. Can you clarify?

The video was found on the web; it's not something that I made. I only posted it as it dramatically shows what was happening.

You will also see that I wrote to to ignore what was said in the video as whoever made it was providing bombastic speculation about what was contaminating the flame.

Paying the price for using my real name and skimming the article too quickly. Nice article, John.

We've all been there and done that. And not for the last time.

Thank you soooo much. I turned on my gas stove to heat up water and notice the burners were a bright orange. Yesterday and today I have been running my sonic humidifier 15 feet away from my stove. Now I know what is causing it.

Had the orange flames on the stove today and called the gas company(Semco Energy). They were at our house in less than an hour, rather impressive. They were lost for an explanation other than maybe the gas company had some dirty gas going thru their lines. Told me to check back with them tomorrow and assured us there was no danger. To end this story we had just purchased a ultrasonic humidifier (Pureguardian) from Costco. Problem solved. Thanks

Thanks so much for this! Could not figure out my orange flame problem but this solved it!

But is it ok to use the stove with orange flames

Amazing! We too called the gas company today after using our new ultrasonic humidifier from Costco for two nights!

The gas company came right out and the guy checked everything then called in. The office asked if we have one. Said they don’t know why. I’ll send them here!

First, why would blue plus yellow make orange instead of green? I suspect it’s the difference between additive and subtractive colors - flames *radiate* colors of light, which combine differently than objects and inks that *reflect* light. Yes?

Next: We don’t have a water softener, so where does the sodium come from?? I’m suspecting it’s from the “demineralizer” capsule that came with the device. My wife just started using it last night. Sensible??

Boy am I gonna have fun with this on Facebook...

Yes it’s safe. The worry about orange flame is if it’s from incomplete combustion. This orange is not from that.

Scientist friends on FB point out that calcium burns orange, so what I'm seeing isn't a mixture of blue-plus-yellow=orange, it's a blue flame and an orange flame.

Unknown said...
This comment has been removed by the author.
1:49 PM

There are so many things that you need in the kitchen to make cooking.
Read more here

If you are having the cooktop that makes your cooking awesome then there is no other thing that will you love in the kitchen.
Read more

You need to make clean your gas cooktop. So anyone that your guest will never hesitate to do cooking on your cooktop.
Click here to find various cleaning techniques.

http://trenzyworld.blogspot expert is saying a big thanks for putting this post together

When it comes to humidity, we settle the nuisance caused by this aforementioned problem

Take a great mystery theme; sustenance, wonderful nourishment; and a gathering of your best amigos who love to the gathering, and you have every one of the elements for an extraordinary supper riddle party. Be that as it may, independent from anyone else, these fixings won't ensure an effective secret night. Here are the three things you should inspire ideal to transform your supper riddle party into the occasion of the year.


Police say the cottage on Route 560 was robbed of an orange Echo chainsaw, an orange Husqvarna chainsaw, a yellow Dewalt drill, a white Makita drill, a water pump and boots.
http://bestconsumersreview.page.tl/

It was really insightful.
Thanks for the info.
Wanna have more contents from you.
Cheers
BTW if anyone interested more have a look view More thanks

Norton Antivirus is known as a champion among the most beneficial excessively convincing antivirus programming which guarantees your PC, PCs, PDA and distinctive devices from savage PC diseases and malware risks. This antivirus programming has introduced a redesigned game plan of antivirus to better secure your PC with improved execution.

I think this is an informative post and it is very useful and knowledgeable. therefore, I would like to thank you for the efforts you have made in writing this article. If you are looking for antivirus security for your PC and any other digital devices than. Visit at my sites :-
geek squad tech support  |  quickbooks support
office.com/setup

I really happy found this website eventually. Really informative and inoperative, Thanks for the post and effort! Please keep sharing more such blog.

Do you know my website recognise as best postal for accounts and management syw.accountonline.com site

Run, dont walk to throw away your
'cool-mist' or 'ultrasonic' humidifier.
Buy a REAL humidifier. These cheap chinese
items 'pulverize' (or ionize) the water,
including everything in it - minerals, salts,
etc. If you have a water softener, there
is enough sodium in the water to change
the burner color. That also means that
your LUNGS, the best filter of all, are
taking in all of these impurities in your
water - including chlorine, if your on
city water. Got zinc in your water ? Your
breathing that in. Got traces of lead in
your water ? Your breathing that in also.

The CPSC should BAN these devices.......

It's the ultrasonic humidifier causing the orange flame. This is the voice of experience speaking.

Thanks. You solved my problem. I'm in St Paul Minnesota. Started my humidifier 6 days ago. Noticed flames turned from blue to orange 3 days ago.

Thanks, this explains my issue. Saved me calling for a repairman.

Thank you for another great article. Where else could anyone get that kind of information in such a perfect way of writing? I have a presentation next week, and I am on the look for such information.
dehumidifier-under-200

tubi.tv/activate is an online platform that is a creation of Fox Corporation and stream the latest content and videos of your interest. In comparison to Netflix, the platform is free to access and you can watch as many as movies you want for free with the help of tubi. tubi tv
tubitv