Elemental Mercury in the Body

I always look forward to Thursday since that is when the new table-of-contents for the New England Journal of Medicine (NEJM) arrives in my inbox. I don't bother with the articles; I just focus on the two "Images in Medicine". Not for the weak-of-heart or those easily grossed out, the images often are of truly horrible looking conditions that doctors from around the world have photographed. X-rays of people exposed to elemental mercury are very common - the density of the Hg atoms gives them great contrast against the soft-tissue background and even the bones. Take a look at this recent x-ray in which a man was exposed to mercury he found in his father's gun cabinet: 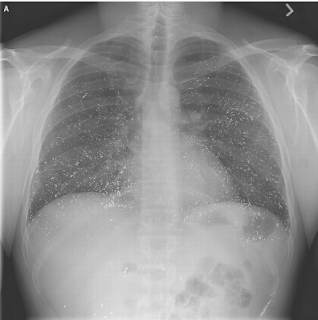 I suspect that the person didn't just get the mercury in his lungs by breathing it, as the concluding line of the doctor's comments was "Psychiatric consultation was obtained, and the patient was transferred to an inpatient psychiatric unit".

This isn't the first time that someone with mental illness did something stupid with mercury either. Back in 2000, the NEJM published my all-time favorite picture of the x-ray taken after a nurse had tried to commit suicide by injecting 10 ml of mercury into one of her veins. The mercury all settled in her lungs to beautifully show off the details of the bronchial tubes. 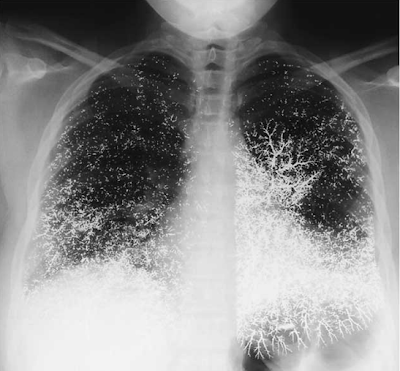 As with the previous patent, chelation therapy was the prescription. But this picture also strongly suggests that elemental mercury isn't nearly as toxic as many people (including chemists) think it is. From the doctor's comments (emphasis added):


"At follow-up at 10 months, she was healthy, with none of the renal, gastrointestinal, or neurologic effects that can result from the oxidation of mercury in the blood and consequent exposure of these organ systems. The abnormalities on the chest radiograph were still apparent. Although these abnormalities are striking, the absence of clinical toxicity in this patient illustrates the differences in the acute and chronic effects of exposure to elemental mercury, inorganic mercury (e.g., mercuric chloride), and organic mercury (e.g., dimethylmercury). Inorganic and organic mercury are much more toxic than elemental mercury; for example, a dose of 400 mg of mercury in the form of dimethylmercury is usually lethal.

10 months later, still with mercury in her longs, she was healthy. As any older chemist who ever played around with mercury from a broken thermometers will tell you, if mercury was so toxic, we'd all have been dead years ago.

While these 2 examples were of someone putting the mercury into their bodies by themselves, the last example that I have is from someone whose own mother lovingly gave the mercury to her son."For 12 weeks, the patient's mother-in-law had provided him with a traditional Indian medicine containing elemental mercury and meals to which approximately 3 Tbs of elemental mercury had been added." Gee, thanks Mom! And the end result? A beautiful radiograph that highlights all the segments of the human colon: 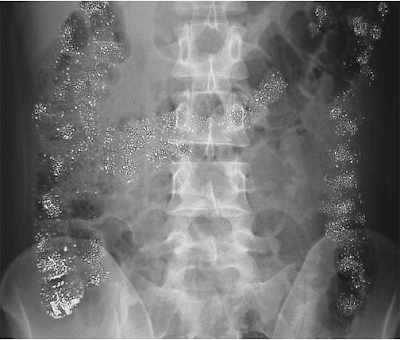 While elemental mercury isn't overly toxic, I still don't want it in my body (or worse yet, I don't want any of my medical conditions ending up in the NEJM!), so for 2014, I hereby resolve to NOT allow elemental mercury into my body. That will be one New Year's Resolution that will be easy to keep (unlike the ones about exercising and losing weight and keep up with the technical literature).

Email ThisBlogThis!Share to TwitterShare to FacebookShare to Pinterest
Labels: health

Very interesting. I'm going to pull some mercury out of my McLeod gauge and roll it around on my computer desk. One note of irritation about the doctor's comments: How is "elemental" mercury not "inorganic" mercury? It's certainly not organic. I think the good doctor could qualify this term as "other inorganic" mercury to distinguish the inorganic salts from the inorganic metal.

The frame is made out of steel making it strong, stable, and ready for long days and nights small l shaped desk. To maximize available space there is a built in keyboard tray and space for your CPU

Let me introduce you to a short article that will help you keep a level headed into what's good and what's not, in the wonderful world of healthy food guides. Helpful hints and tips that will put you on the straight and narrow. Bekam