While many people perceive of jargon as undesirable, I find that it often can have value. For instance, when talking about polymer diffusion, the word "reptation" is invaluable. The word is used to describe the 1-dimensional diffusion that a polymer chain typically undergoes. There are a lot of concepts that are all wrapped up in that little word. 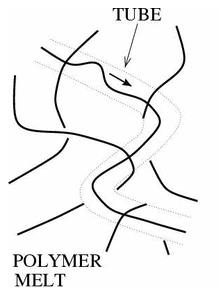 What concepts? Well consider a more complete description of how reptation arises: In a molten polymer, any given chain is constrained by neighboring molecules. The net effect is that the polymer can be envisioned as being trapped in a tube such as is seen on the right. Since it would require extreme coordination of the movement of multiple molecules to produce any motion perpendicular to the direction of the chain, the most common direction for diffusion is along the chain. Since this motion resembles the crawling of a reptile, the word "reptation" is used to describe it.

It's a wonderful piece of jargon. It captures a whole range of ideas in one word, it is very clear what it means and doesn't mean, and if you don't know what the word means, it is highly unlikely that you will think you know what it means.

Compare this to these examples of bad jargon, such as "good laboratory practices" or "physical aging" or worst of all - "resin".

Unless you are familiar with the medical device industry, "good laboratory practices" has no special meaning. You probably figure it refers to working safely, writing data in your notebook and other routines that people have tried to teach you about what it means to be a good engineer or scientist. Unfortunately, good laboratory practices has a very significant and well-defined meaning to the US FDA that extends far beyond what most people think. And that's why it's bad jargon - it's too easy for people to think they know what it means only to face serious consequences when they find out otherwise.

Physical aging is another example of bad jargon. This is used to describe the movement of glass polymers. While it is commonly taught that the glass transition prevents the movement of polymers, that is not true. It only prevents the movement of polymers relative to each other. When the whole mass shrinks and pulls together uniformly (at least uniformly on a local basis), that is an example of physical aging. While it's similar to "reptation" in that few people would be able to devise exactly what physical aging means, it isn't a new or remote enough word to set itself off as good jargon does. Now knowing what it is, would you really call it physical aging if asked to devise a word (or two) for it? Wouldn't glassy shrinkage work better? Or how about "decrementum", from the Latin word for shrinkage.

The worst offender however is "resin". First, it can be used to describe the sticky plant secrection (and these resins can be chemically modified and added to polymers as tackifiers or plasticizers, so don't think that this biomaterial has no ties to the polymer industry). But it can also be used to describe a reactive polymer system, such as a thermoset polyester or epoxy. And it can also be used to describe fully polymerized thermoplastics (usually in the pellet form) such a nylon. In other words, it can be anything to everyone. What a horrible word. It's one I would love to get rid of as it is as descriptive as "thingamajig", and a perfect example of bad jargon.