The Curved-Window Death Ray Comes to My Backyard

You may recall that in my past employment, I worked for a company that was owned by a window manufacturer. Although I had exceedingly little to do with the owners' window business (by choice from BOTH ends), I still learned many details about windows. One of the more interesting aspects was what could happen when the exactly right combination of window, temperature(s) and sunlight all came together unexpectedly. In those rare sets of circumstances, you could have the window glass curved in a concave manner so that it focusses the sunlight to produce an intense beam, jokingly call "The Death Ray". Sometimes it's hot enough to melt vinyl siding and othertimes it's hot enough to burn human hair.

This last weekend, I had my own "death ray" in the backyard of my house. Take a look at this picture: 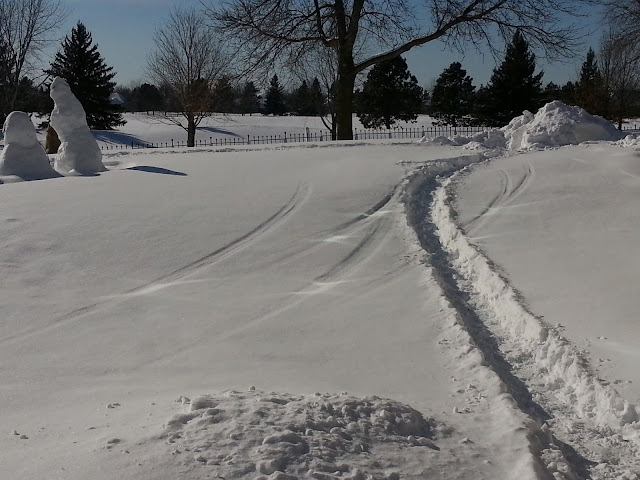 This picture was taken looking west with my house and the curved glass windows are to the right. The sun is low in the sky to the left as the shadows of the partially melted snowmen indicate. Ignoring the trail that I had to make for our Welsh Terrier in the deep snow, in the very center of the picture, you can see several sprite-like caustics (that is the technical term, and it has nothing to do with the strong bases that we play with in the lab) that are melting tracks into the surface of the snow. As the sun moves to the west, these caustics move to east (closer to the spot I was standing). It was very cold when I took this picture, ~ 10 oF (-12 oC). The snow on the roof of the house wasn't even melting, despite have a 45o pitch towards the sun and yet the sunlight from this death ray was hot enough to melt the snow.

What is even more intriguing is this close up of a caustic: 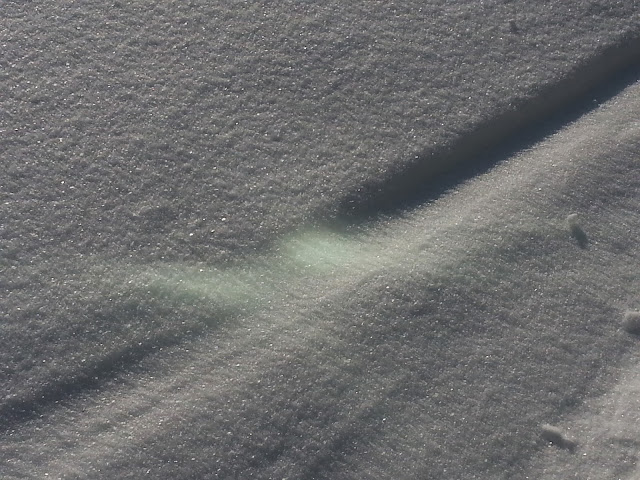 The caustic is moving from the right to the left in the picture and you can see how it is widening the track as it goes. It almost appears that you can see a small separation between each day's track, but I would want a few more sunny days worth of data to confirm that.

I've been waiting all winter to get these pictures and it hasn't been easy. We've had an endless stream of cold followed by snow followed by cold followed by...which has prevented these tracks from being visible on a weekend so that I could take the pictures. Things finally worked out for me. If I had daily midday access to this site (I don't due to work hours), it would be fun to cover one of the windows with cardboard and remove it for a few minutes at noon each day. The spots that would melt the ice would then take the partial shape of the annalemma (reversed due to the reflection the light undergoes).

Next winter will be a wonderful time to build a snow James Bond at the relevant angles.

"Goldfinger, do you expect me to talk?"

A new building in London hit the headlines in September last year for its interesting 'death ray' feature:
http://www.bbc.co.uk/news/uk-england-london-23930675

I guess they won't have to worry about clearing snow from the pavement on that street (OK, only if they get snow in September, which is unlikely)

Nice idea, but "No Frosty, I expect you to melt" just doesn't have that same ring to it.