While Sir Elton John may think that Saturday Night is Alright for Fighting, I think Friday morning is fine too. And what better topic than the always controversial glass transition? ACS Macro Letters just published "When Doe a Glass Transition Temperature Not Signify a Glass Transition", so you can see that this battle is ready to go from the bell.

Over in one corner we have the defending champion of the world, dilatometric techniques. Pull out your old PChem book (or just take my word on it) and you'll see that in a second-order phase transition such as the glass transition, the slope of a volume vs. temperature plot has a discontinuity at Tg, the glass transition temperature. This then is the basis for dilatometric techniques. With polymers, kinetics always plays a role so reaching equilibrium at temperatures near Tg takes extremely long times. Consequently, reported Tg values are all over the place depending on the equipment used and the rate of cooling. Since the temperature gradients within thin samples of material will be much less, variability can be reduced by working with thin samples.

Except it isn't. That is where problems arise and we meet the challengers sitting in the other corner. While thin films do have smaller thermal gradients, the generated data doesn't give us a better picture of the world. 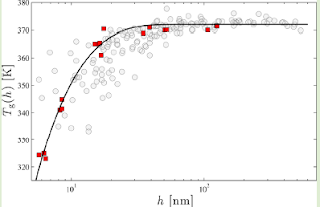 Consider this plot of Tg as a function of film thickness for polystyrene. That is a 50 oC change in the Tg! For better or worse, the researchers have found that this can be explained away as being due to the kinetics of a very thin layer of material at the surface of the sample. This surface material is responsible for the apparent depression of the Tg and hence the title of the paper. The large dropoff seen in the plot above is not representative of the bulk polystyrene and other glass forming polymers and so the measured Tg's are not really Tg's.

While this is a great result, it doesn't make life easier for people making the measurements. Either they need to run thicker samples or correct for this phenomenon.

Tg's are also measured with differential scanning calorimetry (DSC), which looks for an offset in the heat capacity of the sample vs. temperature. While I can see that these results could in principle also apply to DSC measurements, in reality they probably won't. Most DSC's need a pretty good sized sample (a few mg) which inherently forces you to work with samples thicker than 20 nm.

Interesting. I still have to read the paper but I know the topic quite well because I spent considerable time to figure out how to measure the segmental scale dynamics across a thin polymer film. We have observed that indeed the dynamics in polymers on the level of segments is enhanced when decreasing the thickness below some critical value. But more importantly, we the dynamics becomes much more spatially heterogenous indicating that whatever happens there it is not only due to a "surface effect" but something that affects the polymer across the whole film. I have to check the paper but if it assumes a surface layer with a fixed width/gradient I am not buying it.

Wouldn't Dynamic Mechanical Analysis (DMA) be a relatively easy way to assess whether temperature gradients are affecting the glass transition temperature measurement for a polymer material that can be fashioned into a bar (torsion geometry)--i.e., a shift in the tan delta peak? The specimens would presumably be thick enough not to be affected by a "surface effect."