If It Ain't Broke, Don't Fix It

Long time readers know how much I adore the thiol-ene reaction for making polymeric coatings (see for instance, these posts 1, 2, 3 or this 2- part video). It's fast, really fast (I've made coatings that go from pure monomer to cured coating in 0.1 seconds), it doesn't suffer from oxygen inhibition, it's solvent free and works well with endless varieties of terminal enes. So when I see a new report in Angewandte Chemie entitled "Repairing the Thiol-Ene Coupling Reaction", my first thought was don't fix what ain't broke. Unless you can eliminate the smell of the thiols. Then by all means, feel free to do so. My wife will be endlessly thankful as will my labmates.

But it does turn out that my beloved reaction has a technical flaw. It doesn't work well with allyl ethers, such a R-O-CH2-CH=CH2, giving either poor yields after tremendous increases in thiol (oh, great!), or multiple reaction products.

As shown on the right, the hydrogens of the CH2 between the ene and the ether are reasonably labile and will react with the thiyl radical leaving you with a carbon-centered radical rather than the thiol-addition product that you wanted across the double bond. Hence the need for more thiol - it will react with the radical to become a thiyl radical, but that has now taken you 2 equivalents of thiol to do what should be done in one - assuming that the second thiyl radical radical reacts properly. If it doesn't, then add more thiol.

But it turns out that the addition of catechol is able to overcome this. (The authors used 4-tert-butylcatechol since it was more soluble in the reactants, but it's the catechol that is doing all the work.) The proposed mechanism is this: 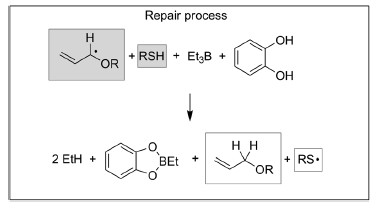 While I like what the authors have accomplished here, there is just one teeny fly in the ointment that you can see when you look at the reaction in detail: they are using triethyl borane (Et3B) as the initiator. Et3B is pyrophoric, meaning it will go up in flames upon contact with air. While that may make for an exciting coating operation, this seems to confine this improvement to closed reactors with inert atmospheres, quite different than the open air conditions that I normally coat and cure in.

So can this reaction be done with my standard UV absorbing photoinitiators? I have my doubts, since the triethyl borane and the catechol directly react via an undescribed mechanism. But it would be fun to try someday. Maybe the next time that my wife is out of town - for a week or more so that I have plenty of time to do the laundry. However, if you look at the videos linked to earlier, you will see me discuss results of thiol-ene polymerization using allyl ethers. I never knew of the problem back then so I just plugged along, but a more thorough analysis of the product would be needed now. So maybe...


P.S., This article had a structure that I've never encountered before:

What is ragus? After some serious thought, I realized that it was "sugar" spelled backwards, much like a "normal" methyl group, -CH3 is often inverted on the left hand side of a drawn molecule to H3C-. Having never worked with functionalized sugars, is this usage common? More importantly, is it really necessary? It's not as if "sugar" implies a certain orientation, unlike what CH3 does.

Interesting. I've never worked with ChemDraw (my last employer couldn't afford it; and haven't had the need yet with my new employer).

So it is time to start complaining about the reviewers? Push for a retraction? Get out the pitchforks and alert Sarah Palin of the corruption that is running rampant through academia?

This doesn't seem to be a consistent error. I'll have the product team look into it but in my single attempt I couldn't replicate it (see https://twitter.com/KayakPhilip/status/444148057219670017/photo/1 if this link works)

Don't know if this used to exist and is fixed, or only occurs for certain cases. Any help tracking down what causes it to occur would always be appreciated.

btw as best we can establish this was fixed a while back. So - an old common ChemDraw error but not one that occurs on the current (or soon to be released) new version.