Yet Another Round of Edible Water Bottles

It's often said that history repeats itself (although I tend to agree with Mark Twain that it rhymes), but I wouldn't expect it to occur on a 2 year interval. Yet that is what has happened. FastCoExist.com is reporting on another attempt to make edible containers for water. Just 2 years ago, a Harvard professor came up with such an item (more on that in a minute). The new invention uses calcium alginate to create soft spheres of water that can (messily) be used and then eaten. 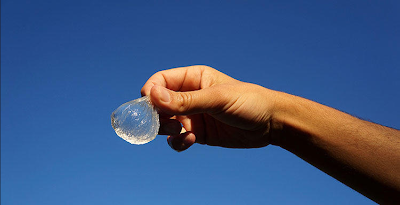 As much as people like to malign PET water bottles for being "single use" and disposable, that bottle has to meet an incredible array of requirements:

Does anyone seriously think that this new invention can handle all these requirements? People get so focussed on just the act of consumption and waste disposal that they completely overlook all the additional requirements. Just the last requirement alone on this list means that this new idea is dead on arrival.

Earlier I mentioned that Harvard professor's similar invention. He has actually gotten a small business going around the concept, calling them WikiPearls, but instead of encapsulating water, they are encapsulating various food items such as ice cream, yoghurt and cheese. Right now, they are being sold at only four Whole Food Stores in the Boston area. Since "The Rheothing's " corporate jet is in the shop, I can't fly out to to Boston to check these out. (Too bad, as they look delicious.) If someone out there has access to Wikipearls, I'd be curious to know about what no one is telling us about - the packaging that is part of this "package-free" food. The WikiPearls must be packaged in something in order to be shipped to the store, even if they are just thrown in a cardboard box, and they have to have some primary packaging which would include the FDA-mandated nutritional information, ingredients list, etc. and that would protect them from premature consumption by animals. So what's the real story about the packaging?

I don't understand the appeal. As you point out, one of the requirements of a container is to seal contaminants out. That way, the dirt at the gym/park/etc. stays on the outside, not in you water. If you plan to eat the container, you'd need another container around it (like a bag for grapes). The other container could be reusable, but then why not just have a reusable water bottle in the first place?

I totally agree with you. The focus is so much on the point of use that EVERYTHING is forgotten.