A Poorly Engineered Condenser That Works Quite Well

About 25 years ago, a colleague of mine had a sign in his office: "Sometimes you just have to shoot the engineer and start production", which summarized his obvious contempt for engineers and their theories. It also applies to what I am about to say. 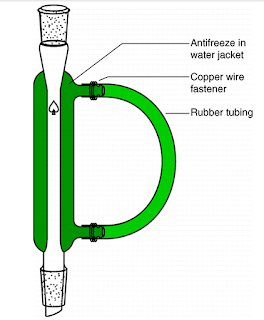 From the Journal of Chemical Education comes a writeup about a waterless condenser, shown on the right. It is just a standard condenser, but instead of being connected to a water line or circulating pump, it is filled with ethylene glycol and a short span of tubing connects the two outlets. It is a simple, reusable setup that avoids either the waste of clean water or the complications of a circulating pump.

Being formally educated as a chemical engineer, my engineering sensibilities are seriously suffering from looking at this.

A condenser is an apparatus for heat transfer and little more, with the heat going from the hot solvent through the glass and then into the fluid. And so I will analyze this from a heat transfer viewpoint. First, the direction of the fluid flow is entirely wrong. The hottest solvent fumes will be at the bottom of the condenser and so the ethylene glycol will be heated there more than further above. The heated ethylene glycol will be less dense, so it will rise and set up a flow that is clockwise in the illustration above. Unfortunately, that means that the ethylene glycol will be moving in the same direction as the solvent - parallel flow. It is a basic principle in junior level heat transfer textbooks that counter flow (i.e., the solvent and the heat transfer fluid moving in opposite directions) is much more effective for heat transfer than parallel flow - you have a larger average temperature difference in counter flow. When there is flowing water in a condenser, it should be set up for counter flow, entering at the downstream point and exiting upstream.

Further, the hot ethylene glycol has very few chances to cool. Normally the heat in the condensing fluid is either dumped down the drain or removed in a cooling section of the circulating pump, but in this case, the heat has to transfer through the rubber tubing to the air. Unfortunately, rubber tubing is a poor heat conductor; copper tubing would be simple to rig up, be much more durable and much more effective at transferring heat to the air.

And yet the blessedly simple design works and works well according to data in the paper. So much for engineering theory. Which way to the firing squad?

Previous Years
May 14, 2013 - The Glass Transition of Teflon

Once I was doing a reaction in ethanol under reflux and I forgot to turn the water for the condenser on. 2 hours and no noticeable solvent loss. I wouldn't recommend it as a matter of habit, but sometimes a condenser without circulation or perhaps even an empty condenser works. This experiment didn't have appropriate controls. Not really the best thing to teach future scientists.

At least that's what my chemist postdoc's logic was. She had to explain it to me three times.. I was baffled.

For small scale reflux, I also used to have a large reflux condenser filled with water and closed with parafilm at both outlets.

As for the "parallel" flow: connecting the water from the top of a condenser will result in having the water not completetly filling it (unless with a Niagara Falls flow) with minimal (if any) heat exchange. Not chemical engeneering, but a misassembled claisen distllation taught it very well...

I have had success on small scale with no coolant running through my condensers and refluxing a medium temperature solvent (60-120°C). At times I have used nitrogen gas flowing through the condenser and even chilled nitrogen gas (by way a coil of tubing in a bucket with dry ice). However, refluxing pentane or diethyl ether you need more cooling. I usually pick my condenser design based on what I will be doing in the reaction and at what temperature I will be running the experiment. Allihn condensers are my favorite. I like to joke that I use the bulbous throat for more reaction volume. When I need efficient cooling I go to a coiled condenser. I have never used a Friedrichs condenser, never saw the point if I had a coiled condenser. My real point was to mention that a closed circuit condenser has been on the market from Aldrich for a while. The catalog number is Z410411 if anyone is interested. However, looking at the price I can see why they went with a length of tubing.