When the general public uses, or more correctly, misuses a term such as "rubber", I am usually quite forgiving. But when a chemist does it, it does tend to raise my hackles some. Consider this recent letter to C & E News:

"The inconveniences experienced by Barbara Warren and Madan Bhasin, two acquaintances/coworkers of mine at the former Union Carbide Corp. Technical Center in South Charleston, W.Va., were interesting and worth noting (C&EN, March 3, page 4). However, equally pertinent are potential unknown dangers caused by the presence of 4-methylcyclohexanemethanol (MCHM) in our water supply for several months.

For example, my physician (Steven Zekan, who has an office on Kanawha Boulevard in Charleston) brought to my attention some white, opaque rubber tubing (~3/8 inch outside diameter) used in instrumentation in his office and that had become nonfunctional. The tainted city water had been sitting in the tubing for about two to three weeks. The rubber tubing no longer possessed the elastomeric properties of rubber. It had become hard and brittle and snapped like a wooden lead pencil.

I have not seen mention of this deleterious effect of MCHM on rubber in Charleston’s newspapers or local TV, which summarized the LD50 from the material safety data sheet but not other properties of the chemical. Our preliminary observation suggests several lines of inquiry. Do the Freedom Industries storage tanks contain any gaskets that could have deteriorated?
Also, Charleston residences would do well to keep an eye out for the possible embrittlement of rubber items such as hoses, washers, gaskets, seals, and the like in their home appliances including dishwashers, hot-water tanks, and toilet tanks by having been exposed to water tainted with MCHM."

The first paragraph is fine, but in the second one, the wheels fall off. "Rubber" How do you know it is rubber, natural or synthetic and not an elastomeric material? "~ 3/8 inch outside diameter". And what does the diameter, especially the outside diameter have to do with any of what is about to be discussed? "The rubber tubing no longer possessed the elastomeric properties of rubber" This is rheologically incorrect. Even very brittle materials such as ceramics still show elasticity. "...snapped like a wooden lead pencil" With jagged edges and fibrous matter perpendicular to the direction of the break? 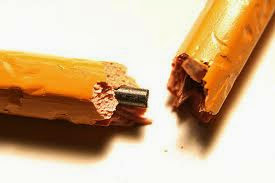 So now that the author has anecdotal evidence of tubing degradation that may or may not have been the result of MCHM exposure (where's your control sample?), it's time to make the big leap and warn of how ALL rubbers are at risk, such as hoses (which are not rubber but PVC in many cases), washers, gaskets, seals and the like which again, may or may not be rubber.

It certainly is possible that MCHM exposure caused the noted tubing to fail. Failure of polymeric materials can be extremely difficult to predict, particularly if the parts are under stress or have already been partially degraded by other exposures (ozone, UV light,...). A perfect example is Environmental Stress Cracking in polyethylene, where exposing plastic parts under stress to water-based surfactants can cause failure.[*] Having to take a guess at this case, I would say solvent-induced crystallization. But that hypothesis is hardly proven here, irrelevant information is included as if it is pertinent, poor analogies are given, and worst of all the total mischaracterization of what rubber is and what is made of rubber. It is very disappointing to see an ACS member write such a technically incorrect letter.

Hat tip to Chemjobber for bringing this to my attention, even if it was on Memorial Day.

[*] Before you go about hypothesizing a failure mechanism, make sure you can also explain why polypropylene doesn't fail in this manner.

Doesn't elastomeric mean rubbery? It seems mainly to be used in a technological context. Elastic is a type of behavior of a material that's more precisely defined.