Like most Americans, I'm not going to be watching any of the soccer/football World Cup matches later this year. As if boring matches weren't enough of a reason to avoid it, the 90-minute long drone of the Vuvuzelas from 4 years ago in South Africa still echoes in my head. You may recall that the Vuvuzela topped my list of alltime worst items ever made from plastic.

Not to be outdone (or more properly, seeing an opportunity to cash in as well with an officially licensed product), Brazil has commissioned an official replacement to the Vuvuzela - the Caxirola, a precussion instrument that is held in one hand. 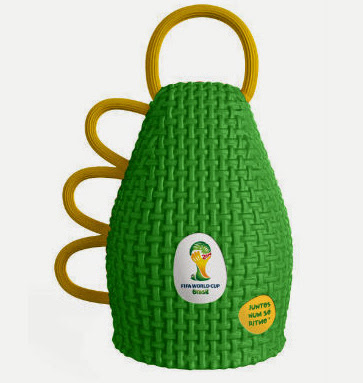 But even in the paradise of Brazil, there is trouble. According to Plastics News,"...here's the rub: the caxirola is made of rigid plastic and has the potential to cause a head injury if thrown with sufficient force or lobbed from a very high seat in the bleachers."

Here's the rub? You mean the noise isn't already "the rub"? You mean there are other problems too? You mean NO ONE anticipated that a fan might just throw the thing. I'm not sure what it is like around the world, but here in the US, disgruntled fans throw whatever is handy - cups, food wrappers, even an Octopus if you plan ahead. Throwing a item that nestles in the palm of your hand would be a natural temptation.

In fact, FIFA has already banned the caxirola from matches due to such concerns. Unfortunately, they banned it too far in advance of the tournament. Given so much time, designers have been hard at work using alternative materials and "...Caxirola 2.0 is currently being tested. The new, improved noisemaker is inflatable rather than rigid and has a soft padded base. Also, the finger loop is now soft plastic and cannot be used as brass knuckles..."

Brass knuckles? That's strike three. Get that thing out of here.

P.S. The 2018 World Cup is in Russia. Maybe Putin will do us all a favor and outlaw all noisemakers. I might just watch a match in that case.

Previous Years
May 8, 2013 - The Final Settlement on the Dow/Kuwaiti Joint Venture