While the ubiquitous PET bottles used for water or pop often get a bad rap, the used bottles are being upcycled in poorer parts of the world as part of roofs. I have two recent examples which are very different. The first uses the bottles as an internal light source. The bottles are filled with water (a touch of bleach to prevent microbial growth) and then placed in a hole cut into the metal roofing material. After being sealed into place, sunlight is collected by the upper part of the bottle and diffracted throughout the living quarters below providing the same light as a 40- to 60-watt incandescent bulb. 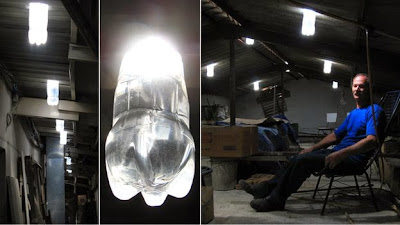 This ingenious invention reduces or eliminates the need for electric lighting during the day, with just short of a million such lights installed in numerous countries. 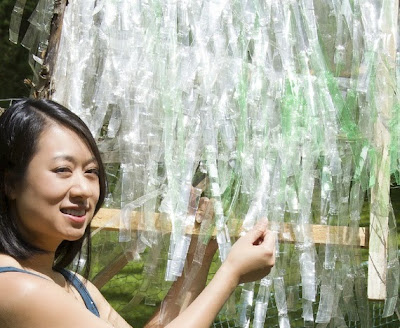 While lacking the simplicity of the previous innovation, it still is an improvement over the current materials being used - grass thatch and corregated tin roofs in that it allows plenty of light in while keeping rainwater out. This project is just starting up so the number of installations is much smaller, but I hope the project is successful. It certainly looks promising.

June 25, 2012 - Researchers who found Estrogenic Activity in Nearly All Plastics Being Sued for False Claims

Very interesting blog. Alot of blogs I see these days don't really provide anything that I'm interested in, but I'm most definately interested in this one. Just thought that I would post and let you know. Heaton Bros Roof

Without a right roof substitute, your own home receives damaged along with your roof right away, now not simplest serving as a notable annoyance, however additionally as a huge hit to your wallet as properly. Right here at 2nd2None Roofing& Construction, as a leading roofing organization in Huntsville Alabama, we undertake to provide you the first-rate roof alternative services round.

Very cool you are giving away such good guidance at no cost. Really appreciate you know the benefits of a roofing contractor in foley

Good post but I was wondering if you could write a litte more on this subject? I’d be very thankful if you could elaborate a little bit further. Appreciate it..! Roofers in Sudbury

Hmm it appears like your site ate my first comment (it was super long) so I guess I’ll just sum it up what I submitted and say, I’m thoroughly enjoying your blog. I as well am an aspiring blog blogger but I’m still new to the whole thing. Do you have any recommendations for novice blog writers? I’d certainly appreciate it. Roof Contractor