A couple of weeks ago, the highly esteemed Chemjobber brought to my attention this article in C & E News about a newly developed set of adhesives based on 1,1-disubstituted alkenes. It is an interesting story from both the business and technology perspectives[1]. The challenge is in effectively preparing the monomers, something that has long been sought. Even W. H. Perkin, Jr. worked on the problem [2] as was mentioned in the inventors' patent. And once the monomers have been prepared,

keeping them from polymerizing prematurely is always a challenge.

I do find it funny that the inventors refer to this new monomer as a malonate, while the C & E News article refers to them as 1, 1-disubstituted alkenes. Neither term is wrong, but it does give you an different perspective on the molecule. Polymers made from 1, 1-disubstituted alkenes, and in particular 1, 1-disubstituted ethylene are commercially available if you like halogenated polymers. The polymer is 1, 1-dichloroethylene is known as polyvinylidene chloride (PVDC) which was originally known as Saran, the clingy food wrap with the excellent barrier properties. Sadly, due to concerns over the chlorine in the plastic, Saran is now a polyethylene-based food wrap with vastly inferior barrier properties. The fluoro- analog of PVDC is PVDF, an unusual polymer in that it is piezoelectric.

Referring to the monomer as a 1, 1-disubstituted alkene implies a polymer of this sort: 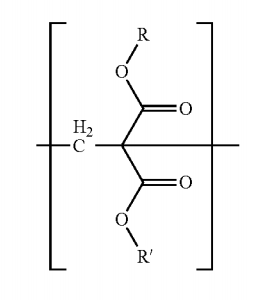 but the issued patent also shows another polymer structure: 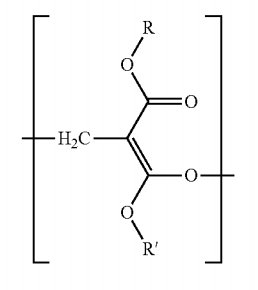 which I have a harder time swallowing. That quite a few electrons to be moving around. No worries though, as the patent is only for the synthesis of the monomer. The polymerization is not claimed.

I do pity the business however, for wanting to focus on the automotive industry. That is just a plain brutal business to be in and it will only cause pain and misery for them. But those volumes are so attractive! The company will need to invest a huge amount of capital needed to produce the large volumes that Detroit wants, only to find later find out that they really don't want the new adhesive all that much, or at least not a decent price. And the pressure on the pricing is only going to increase each year.

But I do wish them the best of luck. It's a neat adhesive that should be able to find a spot in the world, proving once again, that while the Big 6 polymers may dominate production, there is still plenty of interesting options in the long tail for us polymer chemists.


[1] Although I do think the 4th and 5th paragraphs should be swapped. As it is written, Sheppard is referred to without being previously introduced.

[2] Hey Chemjobber, ever been mentioned in the same paragraph as Perkin before? I'm sure it won't be the last time.

Email ThisBlogThis!Share to TwitterShare to FacebookShare to Pinterest
Labels: adhesives