The Journal of Chemical Education has an article on mixing in non-Newtonain suspsensions that is visually appealing. They use blue maize flour, a material whose color is pH sensitive (I didn't know that). It goes through the color sequence shown below. 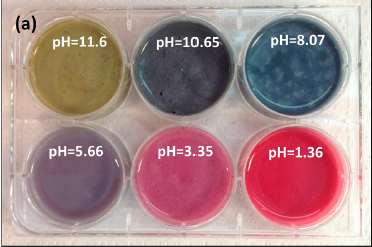 Being a flour suspension, the material is non-Newtonian with a viscosity that changes with shear rate. But even more intriguing is that the viscosity of flour/water suspensions is pH sensitive. So as you might expect, the demonstration/experiment is to observe how well a liquid of different pH gets mixed into the suspension over time. Or doesn't, in this case. Taking 13 minutes to incompletely mix ~ 1.5 liters is not time effective in my world.

The authors are appropriately emphatic about the differences in mixing between laminar and turbulent settings (a distinction that any chemical engineering student understands, but few chemists do). Without getting into defining the Reynolds number and other engineering concepts, I'll keep it simple and say that with low viscosity fluids and high mixing speeds, you have turbulent flow and effective mixing. Conversely, with high viscosity fluids and low speeds, you have laminar flow and poor mixing [1]. In turbulent flow, mixing is as easy as falling off a chair, but in laminar flow situations, effective mixing is only achieved with chaotic mechanisms [2]. 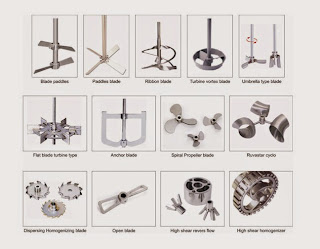 The disappoint part of the paper is that the mixing blade is never shown and there is no discussion about how different mixing blades could alter the outcome. Given the wide variety of mixing blades available, this would be easy to pull off and would help students learn that picking the correct mixing blade is almost more art than science. And then there is blade diameter as well, and side sweep arms and...

Nonetheless, this is a good demonstration, one that I would have found helpful back when I was first learning of these issues. As more and more of our materials are produced from multiphase suspensions and emulsions, this knowledge will become that much more important.

[1] From Mixing in Polymer Processing ed, C. Rauwendaal, 1991, p. 2 "A polymer flow would have to be the size of the Mississippi River and moving at hundreds of miles per hour to have [turbulent flow]."