Is Dow Chemical going to have a proxy fight?

Every time I keep thinking that Dow Chemical may have finally been able to tell activist investor Daniel Loeb to take a hike, he keeps coming back. What a glutton for punishment.

Loeb's latest effort is this flashy website which makes yet another logically inconsistent attempt to acheive changes that he desires at Dow. This website is designed to inform stockholders of his opinions and push for a proxy fight to get two of his handpicked directors on the board.

I'm guessing that Loeb hopes that the impressive visuals of the website will hide the desperateness of his throw-everything-I-can-think-of-and-hope-something-sticks approach. He's using performance issues from as far back as 2006 to justify his proposal. Such an approach always generates internal inconsistencies, such as his insistence that Dow is a petrochemical company [1], and yet when comparing performance to other companies lists not a single petrochemical company [2]. Strange, isn't it? I could go on list lots of other inconsistencies, but what's the point? He's looking to fool naive investors and nothing more.

I've pointed out in the past that Loeb has forgotten his calculus (shame on him, as his degree was in economics), but it also looks like he could use a little help with his organic chemistry: 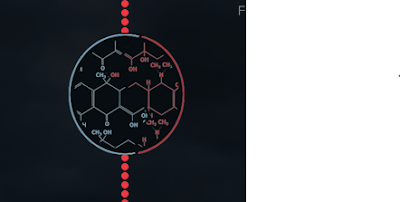 This image is also from the bottom of the "Facts" tab. It seems like a mashup of molecules, so I won't fault him for the images overlapping poorly, but it does have some fragments that are begging for a keto-enol rearrangement. At least the webpage lacks those slow-motion videos of Liveris that make him look stupid/arrogant/insensitive such as we see in our political ads.

It's not as if I am a big fan of Dow. I've lodged lots of complaints against Dow Chemical on this blog, but I really dislike the approach that Loeb is taking. He's looking to cash in on a short-term investment and then leave to cause trouble elsewhere. The chemical industry has enough problems without having to worry about this type of "activism". Fortunately, proxy fights seldom succeed unless a company is really in trouble. Dow isn't, as the most recent results show, so I expect this to (once again) change nothing.

[2] As seen on the "Underperformance" tab

November 14, 2011 - An Extreme Connection between Fracking and America's Cup