Wait, you lost this too?

This appears to be the week to lose things. I lost my job, the only known sample of ε-polypropylene was lost and now the world's smallest 3D-sculptures are lost too. Granted, these sculptures would be pretty easy to lose. Take a look at one: 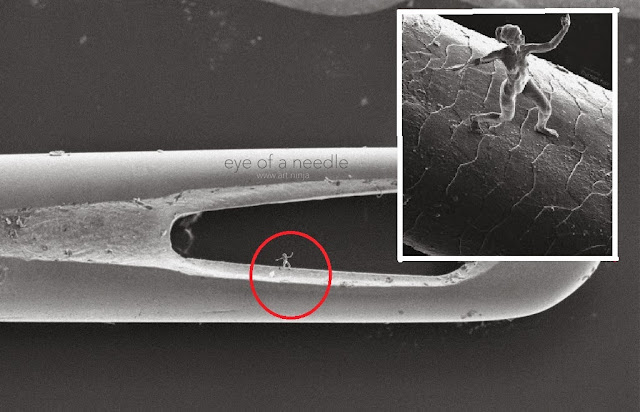 There are additional pictures in the linked article.

These sculptures were made with 2-photon absorption photochemistry, although the details are sadly lacking in the report. You start with a volume of photoreactive monomers such as an acrylate. UV light will polymerize the liquid turning them into a solid, but the problem with using UV light is that it will polymerize everything along the path of the light beam from the outside in. To selectively polymerize just a certain volume of material that is located well inside the mass of liquid, you need to a 2-photon absorption. Take a beam of photons each with half the energy of the UV light and send them into the sample at right angles to each other. Neither beam has the energy to initiate the polymerization, but where the two beams do intersect, there is enough. Viola! You can now polymerize the material at exactly whatever internal volume you want (subject to diffraction limits and a whole bunch of other experimental details that I won't get into) and nowhere else. This polymerization continue until all the appropriate sites have been solidified, after which the unreacted monomers are removed. It's then time to enjoy your beautiful creation.

But be really, really careful about losing it, o.k? No sneezing, coughing or "...mov[ing] the mirror to better see the artistry." Better yet, make it a bas relief sculpture with a large base so that you can't lose it.