King Tut was in the news last week, or more correctly, his burial mask was (although I bet most people don't really know the difference). The breaking news is over a polymeric material and the incompetence of some conservators to do the right thing. Specifically, it is reported that his iconic beard broke off, and was hastily repaired with an epoxy.


"Three of the museum's conservators reached by telephone gave differing accounts of when the incident occurred last year, and whether the beard was knocked off by accident while the mask's case was being cleaned, or was removed because it was loose. They agree however that orders came from above to fix it quickly and that an inappropriate adhesive was used. All spoke on condition of anonymity for fear of professional reprisals. 'Unfortunately he used a very irreversible material — epoxy has a very high property for attaching and is used on metal or stone but I think it wasn't suitable for an outstanding object like Tutankhamun's golden mask,' one conservator said."

But it gets worse. The three conservators really made a mess of things, so much so that you have to wonder if they were possibly named Larry, Moe and Curly.


"The conservator said that the mask now shows a gap between the face and the beard, whereas before it was directly attached: 'Now you can see a layer of transparent yellow.' Another museum conservator, who was present at the time of the repair, said that epoxy had dried on the face of the boy king's mask and that a colleague used a spatula to remove it, leaving scratches."

Take a look at this picture and see the damage yourself: 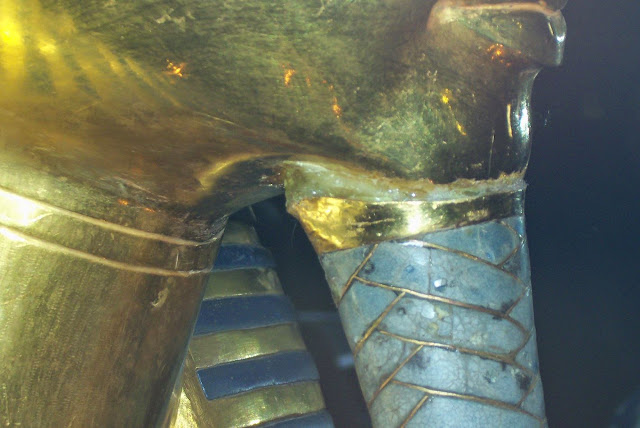 Source
That is an awful patch job - it looks like something I would do puttering around in the garage on the weekend. And that would include getting excess adhesive all over the place. Look closely and you can also see freshly scratched gold in numerous areas of the chin where the excess was removed. King Tut's burial mask, damaged for all eternity.

Fortunately, the chemophobic missed out on a big story here regarding the chemistry of epoxy adhesives. They are usually two-part adhesives, with part A having molecules with multiple, terminal epoxide rings, and part B being a hydrogen-donating molecule, such an amine. Mixed together, the two parts react to form a crosslinked material - "irreversible" to quote one of the conservators. For part A, the most commonly used compound is DGEBA, an abbreviation for diglycidyl ester of bisphenol A. Yes, bisphenol A, that chemical that the chemophobic so love to fear for causing everything awful to our bodies and our children's bodies. While we cannot be certain at this point what the chemistry of the epoxy was, the most likely scenario is that it did contain DGEBA so that now King Tut is being exposed to BPA for his eternal afterlife.

To which I can only say: 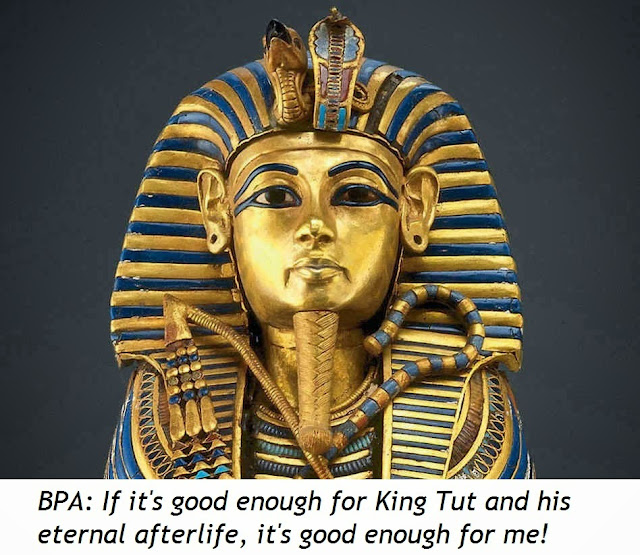