The Dastardly Death Ray vs. The Snowman

Please forgive my absence in posting this week. My thoughts have been elsewhere - on
WORLD DOMINATION!
I've written in the past about the Death Ray that I possess. It is the natural result of sunlight reflecting off the thin, curved window glass on the south side of my house. The curvature is enough to concentrate the sunlight so that it can burn the lawn and melt snow. Egged on by a comment from Chemjobber, I decided to put the Death Ray to the test and use it to sever a Snowman.

Once the world sees the destructive force of my Death Ray, it will bow before me and I will be unstoppable!

Conditions were ideal this last weekend for the construction of my victim - warm and cloudy. I had planned for weeks the exact location. My plan was perfect! The snowman was in the ideal location, now all I needed was sunshine. And that came yesterday. Here is the setup from yesterday morning before the sun was high enough to cause havoc: 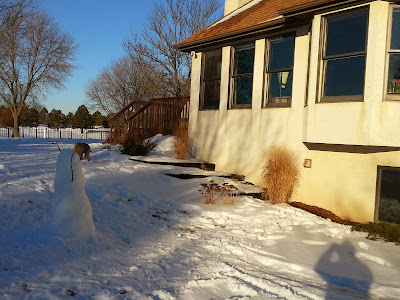 The house faces due south. In just a few hours, the sunlight would bounce off the windows, becoming concentrated and unleash it full photonic fury upon the snowman.

Just before noon, the first of the caustics crossed the snowman's body. Goodbye Mr. Frosty: 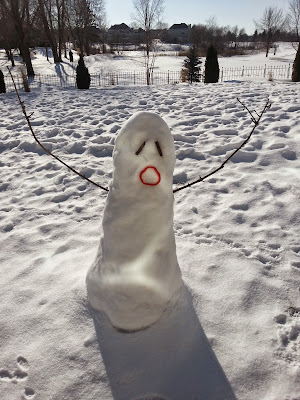 But alas! My plan was a complete failure. The Death Ray barely affected the snowman at all! In fact, the sunshine that fell on the back of the snowman was far more destructive, creating the extensive cratering that is all so common on sunstruck snow. Oh cruel world!. My hopes for world domination are dashed. And worse yet, I now have a snowman right outside my kitchen window that each day will mock me. Instead of having results worthy of publication in both Science and Nature [*], I now can only publish them in a third-rate blog. Oh, why have the Fates seen fit to punish me so?

(The explanation for my failure is fairly simple. The Death Ray is able to cut tracks in the snow field (see the photos in the 2nd link above) while the sun can't because the grade of the yard in that area is away from the sun and towards the house. For Frosty, the slope of his back was facing nearly directly at the sun. Additionally, the sun was able to shine on Frosty for a number of continuous hours, while the caustic crossed the snowman in just a few minutes.)

And so it is back to the drawing board, but that is how science and engineering often is. Now matter how appealing a hypothesis is ("I can sever a snowman with the Death Ray"), we need to run the experiment to prove it, and in this case, face the difficult fact that the Death Ray cannot sever the snowman's body (or even make a noticeable dent). I'm glad I tried, but I think this will be the last time I write about the Death Ray. I'll get back to more normal topics next week.

[*] With a fully functional Death Ray, who was going to stop me? Certainly not Reviewer #3

January 23, 2014 - Dow Chemical Under Attack From Its Own Investors

Email ThisBlogThis!Share to TwitterShare to FacebookShare to Pinterest
Labels: heat transfer, humor, off

Your article was cultivated in a way that it made me sad after I read what global warming did to your lawn but I made me laugh too when I reached the snowman part.