Time's "Person of the Year" - and Plastics 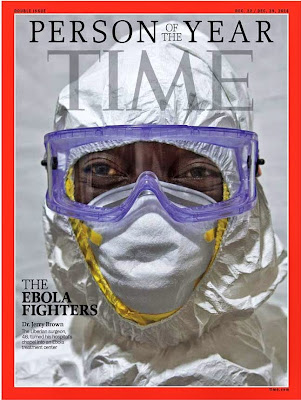 Over the past couple of holiday weeks, Time Magazine came out with their "Person of the Year" issue. The cover, seen on the right, was all over the newsstands when I was shopping. What hit me the most was that the photo barely showed the person underneath - only their eyes and little bit of skin around the eyes were visible. The rest of the person - covered in plastic.

I've made the point before (1, 2) of how much worse this outbreak would have been without plastics, single-use plastics at that, the favorite whipping boy of anti-plastic environmentalists. I seriously question if many of the people reading this would be alive (including me [*]) and whether the world economy would have collapsed once every nation shut their borders if we didn't have such plastics.

Or perhaps the question is a non-starter, since a world without plastics would lack the ease of travel which leads to the ease of spreading the disease. But in the same vein, I wonder how many lives could have been saved during the Plague had plastics been available. It wouldn't have prevented them all, since germ theory wasn't well understood then, but still, there were enough basic public health practices that plastics could have improved the situation some.

None of this is to take away from the people that still have to don and doff the gear (doffing being the risky part) and they deserve out greatest respect. But there still needs to be some recognition that plastics play a critical role in the fight too. Plastics by themselves won't treat the ill or prevent the spread, the medical professionals need to attend to that, but without plastics, their jobs would go from being hazardous to suicidal.

[*] One of the largest Liberian communities in the US is here in the Twin Cities and many of them have traveled back there during the outbreak, so this city and state were following the outbreak with greater concern than other areas. Further, my father volunteers as an English teacher and many of his students are Liberian immigrants. There's your six degrees of separation.

Email ThisBlogThis!Share to TwitterShare to FacebookShare to Pinterest
Labels: health