Sometimes, Being "Cheap Plastic" is a Good Thing

As much as I generally despise the phrase "cheap plastic", there are times where being a low cost material can produce some unexpected advantages. Such as when people steal manhole covers in order to sell off the metal to a recycler. Plastic manhole covers bring less per kilogram for anyone recycling them, so the temptation will be less, even though it should be a lot easier for someone to steal them due to their low weight.

This is not the first time that plastics have been substituted to foil metal thieves. I wrote a couple of years ago about some local thieves who stole the copper piping used to cool a local outdoor skating rink. The Park Board replaced it with crosslinked polyethylene tubing.

Don't you dare think however, that plastic is so low in value to never be stolen. It is stolen frequently (1, 2 and 3). It's just that to make it worthwhile, you need to steal large quantities - truckloads and such.

Nelson Peltz and his Trian Partners Group is still dogging DuPont. Having lost the last round (when DuPont explicitly told him that no, he cannot be on the board of directors and that DuPont was going instead add 2 more of directors of their own choosing), Peltz is still hoping a proxy fight will get him the directorship he so craves. And just like what Daniel Loeb did when he was attacking Dow, Peltz now has his own website, dupontcanbegreat.com [*]. His nominees for 3 other director chairs are rather scary, all being financial guys. (It takes more than fancy financial manipulations to effectively manage a company. See Google, Apple, Amazon, IBM and 3M for counterexamples. See Enron, Bears Stearn and Bernie Madoff for examples of how financial numbers that look great can end up being a complete fraud.) But even more so, I wonder about Peltz himself.

His only experience in running a chemical-type company was Avery from 1984 until 1992 and the results weren't too impressive. In early January of 1984, Avery stock was around $6.50 while at the end of 1992, it was around $13.88. While a 214% gain seems impressive, the S & P 500 rose 260% during that same time frame. Meaning he couldn't even keep pace with the general market. I think Peltz would call that underperformance, but he still thinks he has great advice on how to run DuPont.

Again, I don't follow DuPont's business performance too closely and maybe they do deserve to improve, but I really am bothered by this activist investor approach. If you own stock in a company that is stinking up the joint, then you may try and hype it up some in order to get the price to rise. But the activist investors aren't hyping up DuPont. They are trashing it in about every way possible. All of which raises this question:

"If the company is really that badly off, then why would anyone ever buy up such a large share of it?"

[*] Dupontcanbegreat.com? Couldn't someone have spent more than a few seconds coming up with that grade-school level name? And these guys think they have great advice on how to run the company? 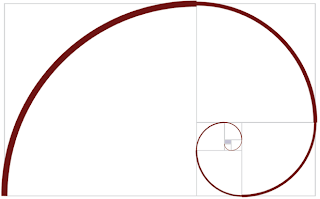 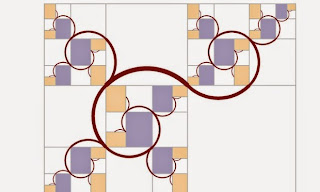 The Most Egotistical of All the Activist Investors

While I would broadly claim that activist investors, with their penchant for running media campaigns putting themselves at the center of attention (and not the supposed problems with their targeted company), are egotistical, Nelson Peltz of Trian Management has raised the bar to a new level. You may recall from a month ago that Peltz took a small position in DuPont and started demanding changes, including having 4 of his directors put on DuPont's Board of Directors. One of the initial recommendations was Peltz himself. Fine, whatever. But that actually now appears to have been not only a request, but his highest demand. DuPont met with Peltz and agreed to let him have a director on the board, as long as it wasn't Peltz. No deal! Peltz insisted that he be the director or he was going to go home and hold his breath. Such an ego! What is so special in the little brain of this guy that he and he alone has to communicate it?

DuPont was quite fine to let him storm off as they immediately afterwards added 2 directors of their own choosing. Geesh Nelson, you could have had 1, but now you have nothing, and the board is that much bigger and more loaded with people favorable to the current management, so that you can even could consider that as a -2, meaning that the score for you suddenly swung by -3 in your direction. And you think you know how to run a company?

Esteemed fellow blogger Chemjobber pointed out to me a couple 1 and 2 articles in the Economist that give an alternate perspective of activist investors. They are well written and do provide an alternative perspective, but I'm having none of it because the articles tacitly assume that all this activism is unquestionably good and that these are good individuals that know what they are doing. Huh? So if you are an activist investor you are automatically qualified as competent? No other field on earth makes that claim. There are bad doctors, lawyers, cops, engineers, chemists, CEOs, teachers, professors, janitors, receptionists, salespeople, actors, singers, athletes and so forth, but bad activist investors? No, they are all quite skilled at their jobs.

Courtesy of 123Designs, we have this infographic about the costs of making stuff out of cheap plastics. 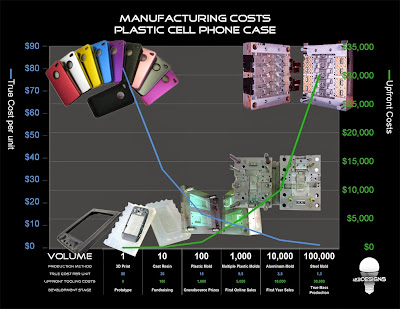 The idea that the graphic is trying to get across is that making stuff out of cheap plastic ain't cheap but the numbers on the vertical axis (either vertical axis) are way off.

This graphic is only about the tooling cost - it assumes that you already have the necessary process equipment installed and operational. So if you already own the $10,000 3-D printer, you really don't need to spend anything on tooling to print your prototype cell phone cases. But if you already own the $300,000 injection molding machine, you need to buy the mold before you can start cranking out thousands of parts per hour. But molds are going to be way more than $30,000 for steel, (try a factor of at least 3). And that assumes you get the mold designed correctly the first time. You may have to go back and remachine it, taking out a little bit more metal here and there to get the flow to fill the mold properly so that you don't end up with
or any of a myriad of other problems.

But the graphic does get the big picture across - options exist to make "cheap plastic" products on a variety of scales. But to cheaply make something from cheap plastics requires some deep pockets. As the old joke goes, "How do you make a small fortune in the plastics industry? Start with a large fortune!"

Plastics touch nearly all aspects of our lives, but there is one area that they are noticeably absent from - food. Very little in the way of synthetic polymers are taken in through the mouth. But that will be change for me in a few hours. Later this afternoon I get to consume about 250 g of polyethylene glycol (PEG) with a molecular weight of 3350 Da. Mix into 2 liters of Gatorade, it will taste pretty good, but I really don't recommend this diet for anyone except when advised so by a doctor. (I have been so advised.)

When we first start visiting the doctor for annual physicals, we are told to stick out our tongue and say "Aaaaah". But after 50 years or so, the doctor gets bored with that and decides to start looking at the other end of your GI tract. He/she gets a better view when the road has been cleared, hence the PEG diet. PEG 3350 is an "osmonic laxative".

The rheology of feces can be quantified by the Bristol Stool Scale which runs from 1 to 7: 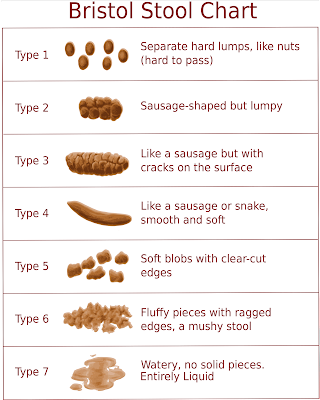