[Note: This is the second part of a 3-part series taking a critical look at the work of University of Texas - Austin neuroscience Professor George Bittner regarding estrogenic activity in plastics. Here is Part 1, which gives general criticisms of his work in this area and here is Part 3 which like Part 2, looks critically at recent publications of Bittner's.]

The first of two recent papers by George Bittner et al. looking at the estrogenic activity (EA) in BPA-free plastics was published in the journal Environmental Health. It is open access, so feel free to pull a copy and read along with me. (As an aside, all of Bittner's articles are published in non-plastics oriented journals, which is probably why he is able to get away with making so many mistakes in creating stress-tests for his samples. The reviewers are likely equally unfamiliar with polymeric materials and their proper testing.)

Overall, I found this recent work to be much more contrite than previous work, lacking the cocksureness of his previous writings. The papers are longer, in part due to taking more time to explain, clarify and rationalize the test methods employed. Broad, sweeping conclusions are not as prevalent. I can't but feel that this is in part due to the lawsuit over the previous work and statements, and maybe even due to my earlier criticisms.

For instance, he has introduced an additional UV testing protocol using UVA bulbs although the germicidal lamps are still being used. 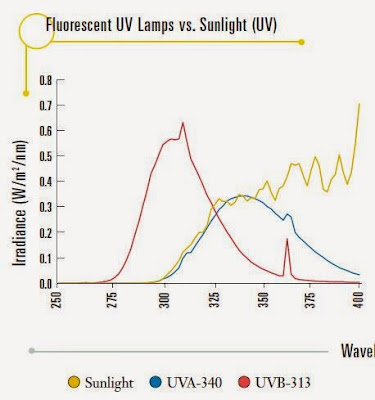 UVA bulbs are better at simulating sunlight than germicidal lamps, but they still are problematic as the graph on the right shows. There is a good match at the lower wavelengths, but the problem is that not all plastics are degraded by shorter wavelengths. A classic paper by Andrady introduced the activation spectra for polymers, a graph which shows that the degradation rate versus the wavelength. Most plastics have a peak in such a plot, with some peaking at higher wavelengths than others. Lacking the activation spectra for a polymer, it is therefore critical to attempt to match the UV spectra of sunlight across the entire UV spectra, not just across a portion that is convenient to test. (Fluorescent bulbs are cheaper to buy and maintain than xenon arc sources, even though the latter can provide a much better spectral match.)

In the past, EA was found by using just the MCF-7 assay, a test that Eastman's experts were quite critical of. This paper also uses a BG1-Luc assay test from UC Davis. Sorry, I don't have enough of a biochem/cell biology background to criticize the test effectively comment on the tests and their validity. But a couple of items did catch my eye. The samples were sometimes extracted with 100% ethanol or various water/ethanol solutions. Why? Also, a variety of blanks were run as controls. But this then lead to selection bias in the results, since when any sham control showed an EA greater than 15% of the response produced by 17β-estradiol (RME-2), the entire experiment was tossed. Why?

The researchers did not run every sample through every stress option and every extraction option, but did a scattering of text configurations. All of which makes it difficult to make broad statements, but nonetheless, I think Figure 3 is telling: 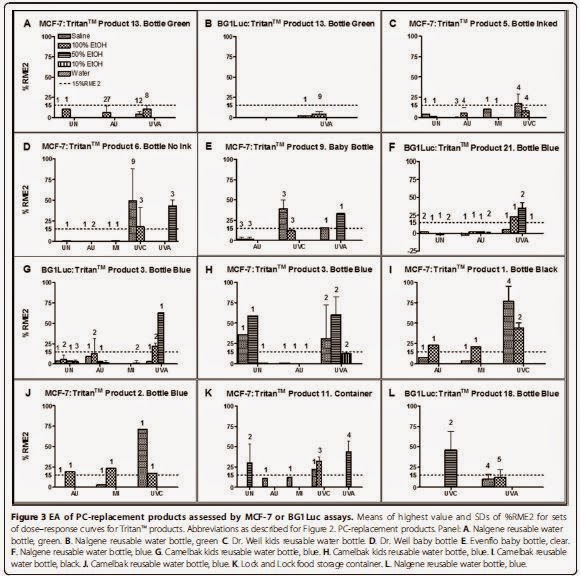 This shows the EA for a variety of samples. 15% RME2 is used as the cutoff for "estrogenic activity". Across the bottom, UN is for unstressed samples, AU is for autoclaved samples, MI is for microwaved samples and UVA and UVC are for the samples exposed to the UVA- and germicidal-lamps respectively. To me, the conclusion is pretty clear. Give so much variation in EA across so many different samples of different colors and processed by some many different manufacturers, it's evident that the base Tritan resin itself does not show EA as seen in Figures 3A and 3B. It's additives, colorants, and processing conditions that lead to a material that can show EA.

For reasons that are not completely clear, the researchers decided to take this matter into their own hands and "roll their own" plastics with additives. They somehow (think) they properly added BHT or BHA to polypropylene. I can't imagine that they did this properly (no details were given - where were the reviewers on this?) and I take issue with the whole approach as well. First, BHT and BHA are seldom used as antioxidants in polymers. Not only are they too volatile, evaporating out of the molten plastic, but they also are rather mobile and will diffuse rather well, leaving the plastic devoid of protection. Instead, BHT derivatives are used. Multiple equivalents of BHT (or BHA) are covalently bonded to a central multifunctional molecule, such a pentaerythritol. The BHT segment is still functional as an antioxidant, but the new molecule is far less volatile and diffusive. So looking at the EA of BHT and BHA (Figures 6A and 6B) is a non-issue for plastics. But secondly, attempting to add and disperse the additives in polypropylene is not something that can be done without the proper equipment. Molten polypropylene is a thick viscous mess and attempting to disperse less than 1 wt% of an additive in a beaker of molten polypropylene with a glass rod is not possible. You need some proper compounding equipment, usually something with intermeshing twin blades in a steel vessel, all of which is heated up.

But then I look at Figure 6C and I want to cry. Some unidentified antioxidants (therefore not something that can be independently verified) were added to polypropylene, and then the polypropylene was kept at 200 oC for 100 hours!!! What was left of the sample if anything beyond a burnt crisp of something that you to be plastic? And somehow the researchers believe that the results are representative of something? How can anyone believe that? 200 oC for 100 hours. Imagine if you had stuck say, a leg of lamb (or a tofu turkey if you are vegetarian) in your oven at home at set it to 200 oC (400 oF) for 100 hours? Besides having multiple visits from the fire department and divorce papers from your spouse ("But Honey! I'm doing this for SCIENCE"), what would be left? Polypropylene is not that different. Why, oh why, oh why does anyone think that this test protocol is of any use at all? And then doesn't that cast an immense question mark across the rest of the test protocols as well?

All in all, this paper, like the previous paper, is just a mess wherein plastic samples have been subjected to extreme questions without merit and then tested for EA. All the previous criticisms I have with this researcher's results still stand. Even when appearing to be responsive and adjusting some test protocols, additional tests, including one which is by far the most abusive test I can imagine have been added. And yet, through it all, there is sufficient data to answer the question I posed in the headline. Is Tritan plastic free of Estrogenic Activity?

Based on the data in this paper, the answer is yes.