March Madness: Brought to you by Plastic

The United States right now is going through "March Madness", the time of year when the annual college basketball tournament takes place. 64 teams are placed in a single-elimination bracket and over 3 weeks, the national champion is decided. But that is not "the Madness". Instead, "the Madness" comes from all the betting pools that are formed in the workplace or with friends. You get a empty sheet with the pairings and have to pick the winner of all 63 games before the first whistle is blown (more on that in a minute) for the first game. If you pick the Drooling Nazgûls from Big State U to win it all and they are eliminated in the 1st round by the Biting Gnats of Tiny Town University, well, better luck next year since your bracket is blown. Correctly picking brackets is rather difficult, and basketball junkies who put a lot of thought into the matter are often made to look foolish by a spouse who picks their teams based on the mascots or the teams jersey colors.

The New York Times yesterday had an article about a tiny piece of plastic that plays a tremendous role in the tournament - the whistles used by the referees. I always figured that the whistle were metal and a had a little ball (called a pea) inside. Wrong and wrong. They are plastic and pealess. Being pealess means that the pea can't get stuck to an interior wall due to saliva or dirt building up (or the official blowing too hard!). Being pealess also means that the internal geometry is pretty complicated and molding it from plastic is a necessity. Here's a look at the one of the drawings from the US patent covering the whistle (# 5,816,186) 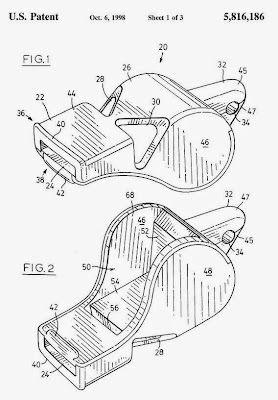 The two parts need to fit together to form the main chamber. Could you make this from metal? Probably. Is it worth it? Hardly.

The article revealed an interesting twist about the whistles used in this basketball tournament. They are not entirely plastic. (Gasp!)


"Each whistle hangs on a lanyard. And just below the whistle is a clip that holds a black wire with a tiny microphone. The wire is wrapped around the lanyard, tucked inside the collar of the official’s striped shirt, and plugs into a box clipped to the belt.

It is the Precision Time System, invented in the 1990s by the former N.B.A. referee Mike Costabile. Each time the referee blows the whistle, the game clock, if it is running, stops. To start the clock, the referee reaches to the box on the belt and pushes a button.

It is choreography that few fans notice. But eliminating the reaction time of a clock operator on the sideline — who pushes a button after hearing the whistle — saves at least 30 seconds of action in a 40-minute college game, tests showed."

I'm not so sure that that extra 30 seconds is worth it to me. After all, it would have changed the outcome of the SMU/UCLA game in a way that would have significantly favored my bracket selections. Well, better luck next year.