The journal Science published last month a new report ($) that attempted to quantitate the various global inputs that going into making up ocean plastic, perhaps better known as the "Great Garbage Patches". The major media outlets focussed on the fact that the amount of plastic in the patches is quite a bit less than expected. But the American media overlooked (by and large) this chart: 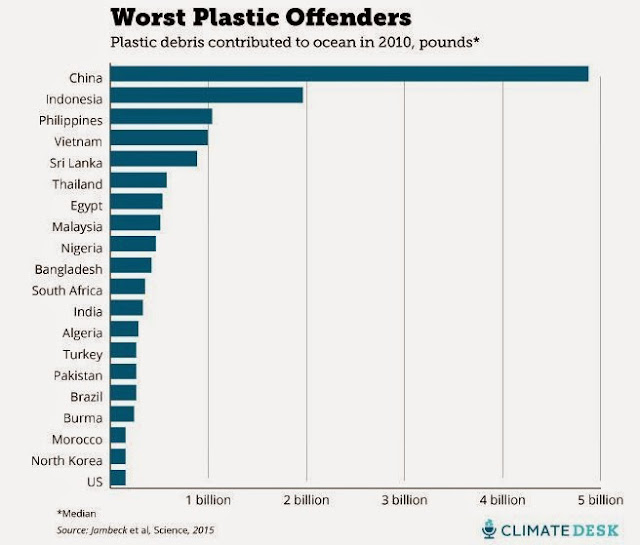 Keep in mind that these are absolute numbers for entire countries. Let's play around with them some.

You could arguably rerun the numbers on a per capita basis. China's population is about 1.4 billion while the US's is about 320 million, a factor of 4.4. This means that the per capita contribution of China to ocean plastic is about 5.5 times worse than the US's (24/4.4). For every one bag that someone in the US lets loose into the ocean, someone in China is letting loose 5.5 of them.

These calculation are not ideal. There are a number of geographical inputs that I wish I had access to. Such as numbers for the population that lives near the coast (and therefore more likely to have their loose waste end up in the ocean). And the size of the coastline would be another factor. (I doubt that a doubly landlocked country like Uzbekistan contributes much to ocean plastic). And then there is the whole breakdown of durable versus consumable plastics as well.

The point of all this is not to point the finger at China or anywhere else or to say that the US can sit back and feel pretty good about itself. 200 million pounds a year is 200 million pounds too much. Plastic waste has no business being in the ocean. But it does raise the question of how important it is to identify the sources of the US's ocean plastic contribution and once that is known, finding effectively solutions to it. Plastic bag bans make great political hay, but are the really effective? Particularly ones that are in cities remote from the ocean such as Iowa City.