So just how many polymer chemists are there?

While polymers have touched just about all aspects of our lives, you might be tempted to think that most chemists work with them. While it is true that all working chemists do to some degree, i.e., they wear plastic safety glasses and rubber gloves, I want to probe the subject just a little more deeply and ask: what percentage of chemists work in the development and/or manufacturing of polymers?

This is surprisingly difficult to answer. My own personal perspective sans data is that very few do. If social media is representative at all of chemists, then the fact that there are very few bloggers and tweeters on polymers compared to the number of chemists involved in those media supports my position. Also compare the size of their readership and/or followers. Further, look at how few polymer research articles are published in general chemistry journals such as JACS or Angewandte Chemie. Or how few polymer talks are given at the ACS national convention.

As I've said in the past,


"If you want to feel like an outcast chemist, take up polymer chemistry."

Googling for an answer doesn't help much. Typing in the question outright doesn't provide any answer, so I took a different approach and searched on "X% of chemists work with polymers", and went with X from 10 to 110. (Yes, 110% since we all know that polymer chemists always give 110%. More on that in a minute.) The only hits I got were at 50% and 70% from the ACS and the University of Oregon respectively. Those numbers are preposterous. No citations are provided (not surprisingly).

I finally hit some real paydirt when I looked at the federal government's tabulations. The Bureau of Labor Statistic (BLS) has collected all the relevant data and provides an accurate picture (open up the spreadsheet for chemists if you to see all the details). In 2012, there were just under 88,000 chemists. Of that number, 2100 worked in "Resin, synthetic rubber, and artificial synthetic fibers and filaments manufacturing", 1900 worked in "Paint, coating, and adhesive manufacturing", and 600 in "Plastics and rubber products manufacturing". That's 4600 in manufacturing. There are some broader categories that undoubtedly include polymer chemists, such as the nearly 18,000 that work in "Scientific research and development services", and the 4600 that work in "Educational services; state, local, and private". Even if everyone of these last two groups were all polymer chemists, that would still only total to 27,200 chemists, not even 31% of the total workforce. I think a more realistic number would be just 10% of those last two groups, which would be 2260 more for a grand total of 6860 chemist. This is not quite 8% of the workforce.

Keep in mind that this is just "chemists". Chemical engineers, materials scientists etc. are not part of the numbers. It could be argued that the ACS pages includes a disclaimer:"As many as 50% of all chemists will work in polymer science in some capacity during their career."(emphasis added), but I'm not buying that either. Jumping fields and going into polymer chemistry is no more likely than an organiker becoming an analytical chemist or a computational chemist become a bench inorganic chemist. It can be done, but that is the exception, not the rule.

Also, it needs no mention that these are numbers for the US only but I would expect similar percentages for other countries. If some international readers have different numbers (or even anecdotes), please feel free to provide feedback either in the comments below or via email (address is on the upper left side of this page).

One final closing thought: If a mere 8% of chemists are able to provide the incredible bounty of polymers that the US and much of the world enjoys, I can't help but think that we are the James Brown of chemists - the hardest working people in chemistry! 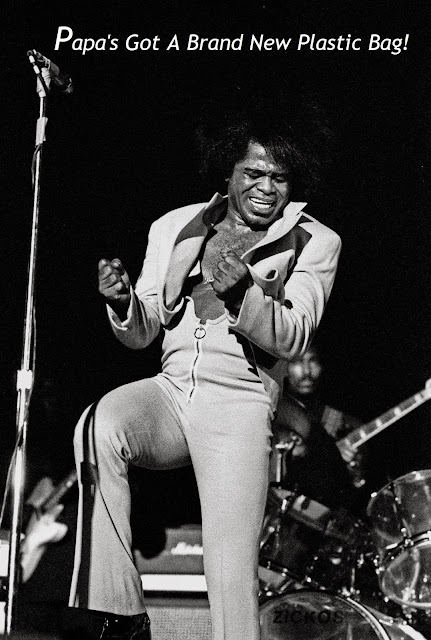 Email ThisBlogThis!Share to TwitterShare to FacebookShare to Pinterest
Labels: employment

Perhaps look into polymer groups at universities? I am getting a Ph.D in polymer science at the moment and work in a heavy synthetic group. Of our department, I would guess about a quarter are synthetic. Two things I have noticed with my incredible depth of early grad school:

1. Most synthetic polymer chemists are American. This causes an issue in my department where there is more people who want to work in polymer synthesis than spots available.

2. Most international students are working on polymer physics or polymer engineering.

I think both of these points go with most synthetic professors are American at my university and most polymer physics and engineering professors are international.

It is cool to know I am a part of this exclusive club! I am hoping it pays off some day!

Interesting observations, but I have some issues with them. Most chemists don't go on to a Ph.D., so looking at polymer groups at universities isn't going to give an accurate picture.

Regarding the chemistry/physics split, my caution has always been for chemists to look past that. The vast majority of polymers are bought/sold on the basis of their physical properties, not their chemistry. Overlook this and you will may find yourself on the outside looking in.

Personally, I believe you've fallen victim to your own pre-conceived notions. You believed that there are few polymer chemists, and you've interpreted the data and made assumptions to fit your beliefs. For example, chemists in many of the categories you've neglected to mention undoubtedly work with polymers (the most obvious being motor vehicle and aerospace manugfacturing).

I question the use of the term "only" when saying a sector of industry might make up 31% of employment. For one category to take up 31% of industry, that's pretty impressive, considering the number of different categories there are.

Also, when taking into account the lack of publication, you must keep in mind that polymer chemitry, at present, is largely an industry-oriented science. As a rule, corporations don't publish in journals. They prefer to either keep their discoveries secret or patent them.

In regards to your claim that jumping into the polymer science from another field is unlikely, I would point out that polymer chemistry truly is a multi-disciplinary filed, incorporating aspects of organic chemistry, physical chemistry and analytical chemistry. It's not as big of a jump as you might think. I switched careers from analytical chemistry for an environmental company to being a quality control chemist in polymers without skipping a beat.

My own personal experience has been that the vast majority of job openings, at least for BS level chemists, are in polymers. Of course, that's only anecdotal evidence. I'm not saying I'm right and you are wrong. Rather, I'm saying that you've hardly proven your point.

And I say only 31% because the ACS thinks that it is 50% - the University of Oregon value is higher yet. Both of these sources have no references cite - I clearly show my sources, assumptions, calculations etc.

You may not think I've proven my point, but this number is the far better than any other number out there. Come up with your own numbers and make your own case.