The field of polymer science lost one of its giants last week with the passing of Sir Sam Edwards. [*]

Edwards most lasting contribution will likely be the Doi-Edwards theory which describes the reptation of polymers. Small molecules in a liquid can easily slip past each other just like people in a crowded party can move around. But polymer chains do not have it so easy. Continuing the crowded party analogy, a polymer chain would be like a conga line. The big difference is that individual people can move in pretty much any direction, but the conga line can only follow where the head of the line goes. This snake-like motion is what is referred to as "reptation" (coming from the same Latin root as the word "reptile", meaning to crawl).

If there is only one conga line (analogous to a dilute polymer solution), the line can move around easily. But for a liquid made up exclusively of polymer molecules, you have a whole room of conga lines. The only way anyone of them is going to move is to get some cooperation from neighbors, and that will take some time. That is why polymers have such a high viscosity.

The Doi-Edwards theory was able to model this reptation motion and found that the viscosity of a polymer melt increases with the molecular weight to the third power. As in the number 3. As in 3.0, or 3.00 or 3.000 etc. 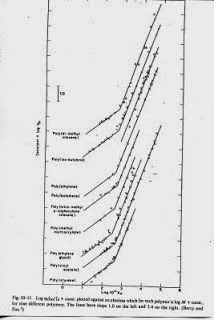 Why the big deal on 3? Well, the theory is close to the data, but not not quite. The data, for numerous systems, shows that the exponent should be 3.4, not 3.0. And everybody knows this. Everybody has seen this famous plot on the right, showing the same slope for all those polymers. That was a big gap to try and close.

Shortly after the Doi-Edwards theory was published, I was fortunate enough to attend a lecture of Sir Edwards where he tried to soft-shoe and hand-wave over the difference. (I don't think he did too well.) Regardless, reptation has been clearly document via experimentation, and Doi-Edwards is still widely used as the basis for modelling polymer dynamics, so it all to the good. Whoever does find the missing 0.4 (if it hasn't been found already) will not receive the same recognition. That's how it goes.

[*] Dame Athene Donald seems to be the only one to have noticed this passing. There is a post in her blog and an article in the Guardian, but Google comes up empty when I search for an obituary. Strange indeed for such a large figure of science.