Messing up on Recycling Codes

My wife and I had a bottle of Fairlife Chocolate Milk last week. After we finished if off, I looked at the bottom of the bottle to see if it was recyclable. It is. Or is it? You decide: 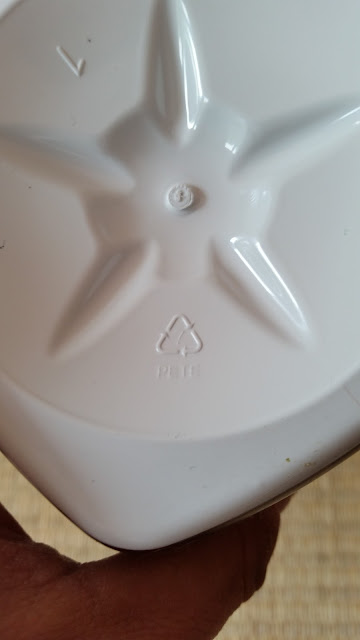 Yep. It's identified as both "PETE" and as a number 7.

The only problem is that PETE is a number 1, while a number 7 is "Other". So which is it? I can't tell just by looking at the bottle since it is colored white. If it was clear, then it would likely be PETE, but once a plastic has been pigmented white, it's a lot tougher to guess it's identity. At this point, I would have to say it is unrecyclable. I had no choice but to toss it in the trash.

My first thought is how can a major-league company like Coke (which owns Fairlife) screw up something so simple? But I have seen weird stuff in the past too, such as this one from 5 years ago where the bottle was labeled as both a 7 and a 5, but it clarified the matter by saying the 5 meant it was PP compatible.

I've always been unable to understand consumer confusion over the recycling codes, but company confusion seems to be common too.

Part of me wonders how much the recycling codes even matter. Would this bottle not just get machine-sorted based on density, or some kind of quick infrared spectrum?

To render matters even more confusing, there is a "1" on the other side of the bottom of the bottle.

How could Coca-Cola screw up something like this? Well, it is the company that gave us "New Coke" ("sweeter, flatter, more like Pepsi").

Seriously though, this is likely to be a screw-up on the part of a bottler with whom Coca-Cola has a packaging and distribution contract. At least that's how they used to do things.

It was good, but chocolate can cover up a lot of flaws. The real test would be the plain milk. I'm much pickier about that.