While I'm all in favor of plastics displacing traditional materials in most applications, I have some serious doubts about this one - a Dutch company, VolkerWessels, wants to replace traditional asphalt and concrete roads with plastic. And not just with a layer of plastic, but a construct that has a hollow inside so that pipes and other utilities can be run through it. Take a look at this concept drawing: 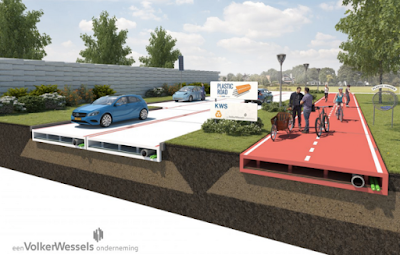 My immediate thoughts were how much this looks just like another picture that I recently discussed:

This is a cross-section of the infamous Morrison Bridge that was recently installed in Portland Oregon and has begun to fail very quickly.

Similarity in shape doesn't mean similarity in failure, but the article does little to allay my fears.


"VolkerWessels, is collaborating with the city of Rotterdam to start prototyping plastic-built roads in a “street lab” provided by the city...The idea is to recycle plastic from oceans into a tough aggregate that could be poured and molded into pre-fabricated “bricks” and installed on site quickly." (Emphasis added)

Ocean Plastic?!? Don't they know that nobody has an effective means to recover ocean plastic, certainly not on the scale that would be needed to make a road of any decent length? But since we are in the pre-prototype stage, you can dream all you want. Or at least until "the rubber meets the road" (sorry, couldn't resist) and the surfaces are tested. Somehow I think there will be lots of failures setbacks "learnings".


"VolkerWessels’...has years, even decades, of research and development ahead of it, if it survives."

Quite the understatement if you ask me.

July 15, 2013 - Closing the Door after the Horse has Gone Tilting at Windmills

They could get years of national and EU funding on the strength of their environmental commitment - even if it is more improbable than anything Irwin Allen ever dreamed up. That kind of thing happens in the US every once in a while.

You mean like Solyndra? (The company that Obama publicly supported with a $500 million loan, only to see the company then go backrupt>)

Actually I was thinking of something more removed (the "origami condom" scam by Resnic, which reaped $2.4 million from multiple NIH grants over a period of 7 years).

I gather Solyndra is a bit more problematic from people who claim to be close to researchers at the company. It sounds to me at its most innocent like an innovative product meeting with a failure of adequate marketing and management that took the money and ran. I suspect worse.

You know Tesla bought a building formerly occupied by Solyndra? It was one of those moments where I realized today's news trumps anything I can make up.

I agree. And Solyndra was much more of a political hour potato given Obama's very pronounced support. But I'm sure the list of government supported businesses that offer promise despite major technical challenges is too long for anyone to list, and if sufficient archives existed, would span millennium.

There is an interesting Sufi parable that describes this phenomenon:

Nasrudin was found next to a pond, adding spoonfuls of yogurt to the water. He was asked the reason for this perplexing action.

"You fool! Don't you know you can't make more yogurt that way? You have to add it to milk."