Chemists at the University of Arizona recently announced that they have experimental proof that ethylenedione, O=C=C=O, exists. It's basically two carbon monoxide molecules, C=O, butted together. The linked page will provide you more background about it; it's pretty interesting since the molecule has been theoretically proposed for quite some time, but since it falls apart in about half a nanosecond (literally) to two carbon monoxide molecules, you can't really plan on buying a gallon or two and doing something with it.

Too bad, as I would want to polymerize it. (No surprise there, huh?) All those double bonds are just screaming at me to be opened up and go chain forming. If you went for the C=C double bond, you would end up with what I am jokingly (or not) calling polydiacetyl: 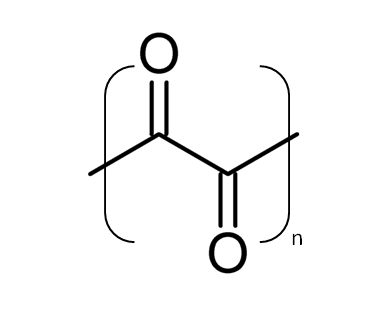 Or maybe polypopcorn butter, since diactyl has been used for artificial popcorn butter flavoring. Polyketones - polymers with a carbon backbone and pendent ketones - do exist, but not like this. They are normally made by copolymerizing carbon monoxide and ethylene (and maybe some propylene), so there are far fewer ketones than what we would have here, hence the unique name to differentiate it.

But maybe having less ketones is a good thing.

The Wikipedia article on diacetyl states: "A distinctive feature of diacetyl (and other 1,2-diketones) is the long C-C bond linking the carbonyl centers. This bond distance is about 1.54 Å, compared to 1.45 Å for the corresponding C-C bond in 1,3-butadiene. The elongation is attributed to repulsion between the polarized carbonyl carbon centers." That's some intense repulsion to extend a C-C bond by 6%. But that repulsion then gives me a good idea of how the polymer would behave if it were ever made. Despite having a pure carbon backbone, the repulsion would force the chain into a fairly extended configuration, more like a liquid crystal than the random-walk globule so typical of most thermoplastics. So I would expect this to be pretty viscous when molten. While the polymer would have a pretty regular structure and could, at least on paper, seem amenable to crystallization, again, I think the repulsive centers would most likely resist such regular packing and so the material would likely be glassy as well.

Viscous and glassy and impossible to make. Not an ideal combination. I doubt I will ever have these guesses confirmed, but one can dream...

Email ThisBlogThis!Share to TwitterShare to FacebookShare to Pinterest
Labels: polymerization

One other interesting thing about the polymer is that it would be quite coloured - e.g tetraketones are red. They are also cleaved by light, so it would be a photo-unstable polymer (which might be useful). I have tried to think of ways to make it in the past but havent come up with anything good enough.

Oh and the hydrate is usually more stable, so any water and you lose half your ketones

There is a compound which is a "hydrate" of C6O6 (which has a hexagonal arrangement). This is not a true hydrate of course, but rather is more like an acid.

Here are some references: