Plastics to Aid in Fighting the California Drought

The State of California is suffering through a 5-year drought with no end in sight. Ironically, as much as Californians love to rage against plastics (instituting endless bag bans and regulating countless other chemicals that are added to plastics or used in their production), there are more and more examples of plastics being used to help the state in this time of need.

In just the past few days, the city of Los Angeles placed 96 million black, hollow polyethylene balls in a water reservoir. The balls float on top of the water reducing evaporation, keep away birds and provide other benefits. 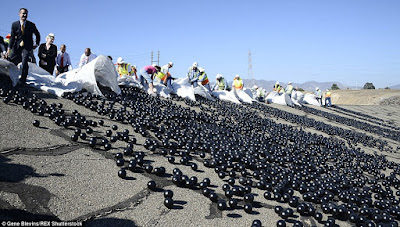 That would have been fun to help install. And if the reservoir ever runs dry, then LA will have the worlds largest ball pit.

At the same time two, plastic pipe manufacturers are using the drought to help sell their products. Nationwide, about 16% of all purified water is lost due to leaks and broken pipes with most of the pipes being ductile iron. Large volume plastic pipes were not available when most of these water systems were originally installed but they are available now. PVC pipe is ridiculously easy to join. As many homeowners know, you brush on the primer and adhesive and then push the two pieces together. Voila - a solvent weld that is most likely stronger than the original pipe. Doing this with a 12" OD pipe or larger is a little more difficult due to the weight of the pieces, but the heavy equipment needed to lift them is readily available. HDPE pipes are also available. HDPE cannot be solvent welded however, so more specialized equipment is needed to heat up the end sections to allow them to adhere, but again, this is being done more and more in new installations.

The unfortunate part of this is that California is 5 years into the drought and only now are these steps being taken. Neither step will eliminate the drought, but they will allow existing water supplies to last longer. Had these steps been taken 4 years ago, the Hollywood movies stars might still be able to water their lawns. It's just another reminder of our inability to focus on long-term problems until they reach a crisis state.

August 14, 2013 - The Pitch Drop Experiment for the Impatient

People don't focus on long-term problems because they're expensive to fix, and no-one wants to spend the money. It's the same everywhere.

Curious... why would they use black balls instead of white or some other reflective color? Although they reduce evaporation by limiting surface area, they'd also heat the water underneath much like a pool cover. Unlike a pool cover, the water can still escape from between the balls.

While there are numerous comments elsewhere about the black color, my guess is this is going to be a long-term application, so you want the HDPE to last. Black is the most affordable way to go. White would be cooler, but TiO2 is so much more expensive than carbon black.

I think owing to the geometry that the "blanket of balls" tends to recapture a lot of the water vapor, which condenses and flows back into the reservoir - much like glass beads get used in some distillation procedures.

I agree with your first sentence, but not the second. Putting anything on the top of the water will slow the evaporation, be it black balls, rubber duckies or a solar cover.

The packing in a column such as Raschig rings or anything else, is designed to spread out the liquid so that the gases can contact it over a larger area in an attempt to better approach equilibrium and increase mass transfer. Here, the objective is avoidance of mass transfer.