I've read a lot of patents (too many patents) over the years and have seen plenty of good ones and plenty of bad ones. A good patent will be based on an unexpected result, a true discovery instead of an incremental improvement in an existing field. It's usually pretty easy to show that it is a true discovery when you can find literature suggesting that your discovery will not work. Even better yet is when the literature explicitly states that your discovery will not work.

Bad patents on the other hand, exist for any of a number of reasons. They can have extremely narrow claims, they can be flat-out wrong (bad/unreliable data, goofy conclusions from the experiments, etc.) and they can be overly descriptive and provide too much information. It's this last category that I want to talk about today and the authors of such patents. My experience has been that they are almost always written by academic researchers and not industrial researchers.

Consider this recently published application that looks more like a research paper than a patent application. While it is a joint invention of researchers at Northwestern University and Dow Chemical, you can tell that the application was based on a paper that the Northwestern researchers had written for publication, only to later shoehorn it into a patent application. It describes a new catalyst for non-isocyanate containing polyurethane systems, an interesting area since isocyanates exposure can lead to some serious health issues. But the application contains way too much information, lots of which is irrelevant to obtaining approval for the application. For instance, Figure 3 shows the reaction kinetics: 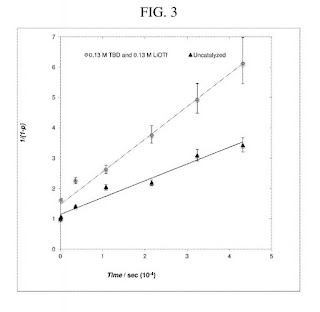 The text further explains that the lines are from second-order kinetic model and has values for the reaction constant and the activation energy. Figures 4 and 5 (not shown) have DSC and DMA sweeps (respectively) showing differences between the catalyzed and non-catalyzed polymers. Even the body of the application is filled with reaction mechanisms that really are not relevant to this issue at hand here: getting a patent with good claims.

If you are submitting this research to a journal such as Polymer Chemistry, you need that information. But all this additional information just detracts from getting a good patent: the information is never used in the claims at all or to differentiate this invention from previous, similar inventions. And worse yet, this information could be used by competitors in the future to show that the claimed invention should be narrower than originally issued since all this information goes to limit the claims. Suppose you find a catalyst that exhibits first- or-third order kinetics? That's not what was taught here, so the results are arguably patentable. Or a catalyst that left the DSC and DMA results unchanged? That sure seems patentable.

A patent written by industrial researchers might include kinetic information (this is a application for a catalyst after all) but it would be very crude. Mixture A cured in X hours while Mixture B cured in Y hours. No modeling, no theory, no kinetic parameters. It would only include DSC and DMA information to differentiate a new invention from previous inventions. While this lack of information gives the impression that industrial researchers are being secretive (and to some extent they are), they are also being defensive and trying to get and keep the broadest claims possible for their invention. Academic researchers would do well to learn from this approach.

The less you can say in a patent application, the better.

Hat tip to Geert Bleys of the Innovations in Polyurethanes blog for noticing this patent application.