Canada introduced polymer currency back in 2011 in part due to their increase longevity compared to traditional paper currencies, and also in part due to the increased difficulty to counterfeiting. But that time is over. CBC News is reporting that fake C$ 100 are popping up in Regina, Saskatchewan. Take a look at the fakes (on top) and the real bills (on bottom): 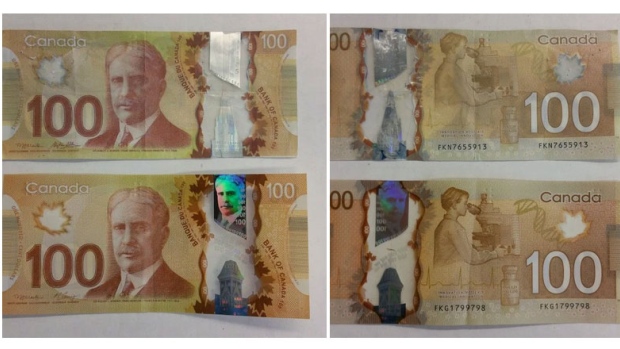 The images are pretty well done; the only glitch is the silver tape (probably a vapor-coated aluminum PET) that was used instead of the clear holographic tape.

Somewhat ironically, this is the most science/technology oriented bill that Canada issues. The distinguished gentleman is Sir Robert Borden, a former Prime Minister (I had to look it up as my knowledge of Canadian PM's is limited to Trudeau and I couldn't pick him out of a police lineup), but there are also "stock" images of a women with an optical microscope (looks like it might even be a polarizing model), an EKG scan, the obligatory DNA double-helix and a vial of insulin.

But why the C$ 100 bill? Why not a smaller denomination like a 50 or a 20? A 100-dollar bill is likely to gather attention and closer inspection that a 20 and a 50 won't. 20's are standard issue from an ATM (although 50's are becoming more and more common) so people are unlikely to pay as close of attention. Unless the counterfeits are really that difficult to make so that the extra large denomination is the only way to make counterfeiter's scheme payoff, someone making smaller denominations could go on for a much longer time span before getting attention (and ultimately detention!).

Not having a criminal mindset, I don't know and never will.

September 22, 2011 - Another Source of Ocean Plastics - Your Clothing

Email ThisBlogThis!Share to TwitterShare to FacebookShare to Pinterest
Labels: film

It's actually serious news that these bills are now being counterfeited, as they've only been circulating for a couple of years.

Some of the medical technology images on the $100 are meant to be allusions to Canadian discoveries or inventions (the artificial pacemaker, and the use of injected insulin to treat diabetes).