Elemental Sulfur as a Monomer

It's been far tooooo long since I commented on a research article, but it's time to change that. Angewandte Chemie has an open access Early View article on a new elemental sulfur/limonene polymer. The researchers are from Flinders University (South Australia) and the research has received quite a bit of press since it is able to capture mercury ions (Hg2+) from water, and as a bonus, changes color it does so. A further bonus is that sulfur is a waste product of the petroleum refining industry and limonene is a by-product of the citrus industry, (although somewhat more valuable than elemental sulfur).

The reaction is straightforward: 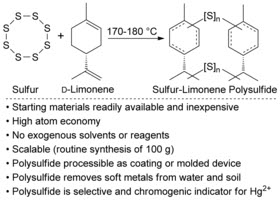 Simply melt the sulfur, add the limonene and wait. The sulfur rings upon heating break apart and form thiyl groups which react with the unsaturated bonds in the limonene. This is remarkably similar another sulfur/organic copolymer ($) that I blogged about 2 years ago (1, 2), which took the same approach of heat and dump. In both cases, the unsaturated organic compound needs to be low enough in volatility that the hot sulfur (> 170 oC) doesn't evaporate too much of it off.

As is shown above, there are stretches of sulfur-sulfur (sulfide) bonds between the organic segments, and these are what capture the mercury (hence the old name for thiols of "mercaptans"). I did find it somewhat surprising that the amounts of sulfur:liminone were 50:50 on a mass basis.


"An equal mass of sulfur and limonene was chosen to maximize the content of both industrial by-products in the final material."

The authors themselves note that sulfur is produced at nearly 1000x the rate of liminone, so maybe trying to incorporate a little more sulfur would be a good idea. Additionally, the formula weight for liminone is 136 g/mol while that of sulfur (S8) is 256 g/mol, which further skews the ratio of the comonomers towards the limonene.

I also wonder how long researchers are going to keep running these reactions in open flasks. The engineer in me is makes it really difficult to not scream at the monitor about running the reaction under pressure so that the volatility would no longer be a concern. Or maybe in a twin-screw extruder, for continuous production of the polymers. That would make for a great patent, wouldn't it. Or maybe I should say "would have"...

Interesting paper. I would agree that limonene is in much shorter supply than sulfur. There are other terpenes out there, though, that'd likely be pretty cheap. Even "diterpene" (racemic limonene prepared synthetically from pinene) or things like terpinene, etc. There are a lot of forestry waste products that might also be useful -- rosin acids come to mind.

Rosin ester are already extensively used as tackifiers and such. Besides, the general population views trees as far more valuable than agricultural waste (and I concur to some degree). So while we should take advantage of all waste products, biosourcing polymers from trees is not likely to be as well received as biosourcing them from orange peels, corn stovers, chicken feathers...

I'm actually speaking mostly about the waste -- tree stumps (which are a good source of particular rosin acids).

Off topic per say, but any thoughts why the leading emitters of Hg don't just run the stack through a S8 filter? Should be cheap and easy. But I'm just a simpleminded industrial chemist.