Back in July I wrote about the non-recyclability of the container used by Fairlife for their chocolate milk. The recycling code says "#7 PETE" which is problematic since PETE is #1 and "Other" is for #7. Since I didn't know how to sort it, it went into the garbage. I email went off to Fairlife to explain themselves, but their reply only muddied the water further, stating that a white pigment in the PETE made it a #7. That's not right since pigments do not affect the recycling codes for any other plastic. I speculated that there was likely a barrier layer that made the container a #7.

It looks like I was right. A person [*] with access to some lab equipment cross-sectioned the container and found this: 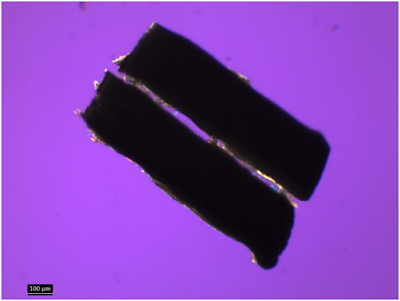 Busted! There is a barrier layer in there. The identity of it is unknown, but ATR-FTIR did show the 2 main layers to be PET.

So it's time to send another letter off to Fairlife. Hopefully I'll get a more truthful reply (and not so many words in ALL CAPS!).

[*] Note: the person who did this analysis wishes to remain anonymous. I will respect that request and am very grateful for their contribution.

October 27, 2010 - The Coolest Thing You Can Do With a Polymer - Set Yourself Ablaze