Sometime in the last few minutes, the all-time number of pageviews for this blog made the quantum leap to 7 figures.

(Ok Mom, you can stop clicking on random internal links now). If I only had a nickel...

Since it took just over 9 years to get this far, I project it will take about 90 years to get to 8 figures. Looks like I ought to seriously start exploring life extension options.

If you were perchance on of that 1,000,000, I express my sincere thanks to you. I'm deeply honored that anyone wants to read what I write.
Posted by John at 11:52 AM 0 comments

Reinventing the Wheel (only this time it's a biodegradable plastic!)

While I've always been of the opinion that biodegradable plastics will be limited to very specialized niches, others don't always feel that way. Take Marieke Havermans of the Netherlands. A former packaging designer for Heinz (as in ketchup), she recently discovered an unrecognized application for biodegradable plastics. As reported last month by Plastics Today:


"When Marieke Havermans’ mother-in-law died, the family was given a catalog to browse through by the funeral home from which to choose the casket they wanted. 'Each and every one of them was basically dark, ugly and too expensive. For the most part, they were made of particleboard that was lined with leak-proof paper—which was not what we were looking for,' she said. 'Particleboard is a cheap construction material that emits formaldehyde. There’s no dignity in particleboard.'

Havermans was convinced that there had to be a better way. Her idea was simple: 'Why not design a sustainable casket made of a natural bioplastic that would, in time, simply biodegrade? A casket that would not only impact less on the environment, but that would also be an attractive and affordable option for everyone,” she explained.'

So she got together some polylactic acid (PLA) and some reinforcing fibers and voila! created a biodegradable plastic casket.

I'm not sure that I see any "dignity" in PLA, but maybe others do. Further, PLA is only considered biodegradable in an industrial compost site, which is not the same thing as a cemetery.

Another sticking point is that here in the US, the use of concrete burial vaults is very common. The bottom of the vault is placed in the ground first, the casket is placed inside the vault and then the concrete lid is placed on top. The reasons for use of burial vaults aren't exactly clear. Possible reasons are to prevent the ground from sinking over time as the casket degrades. Or because it slows the degradation of the body in case it needs to be exhumed for a criminal investigation. Or (cynically), because someone wanted to make more money than just selling caskets and burial lots.

Regardless of the reason, the near ubiquitous use of vaults will probably prevent these caskets selling well here in the US. But there is one other reason that I don't see them selling well (and why I have to laugh at the idea of this casket): it's because biodegradable burial caskets have already been in use for hundreds/thousands of years. They are called "pine boxes": 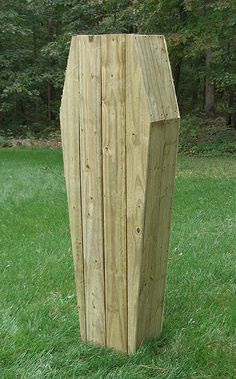 Reinventing the wheel I say. That the wheel is justified by marking it as "biodegradable" when other traditional options are too is scamming people when they are emotionally vulnerable.

Time for a Cage Match

Apologies to the fans fan of this blog (Hi Mom!) for not posting in such a long time. Between Thanksgiving and winding up the school term, it's been pretty haywire. But the final exam has been written, (not proctored - that comes Wednesday) and then it's just a matter of final grades, although I am taking advantage of the break to start working on lecture notes for next semester.

But I have a great welcome back item - the announced merger of Dow and DuPont. Both of these companies have a lot in common. They are both huge. Their names both start with the letter "D". And they both have had to put up with activist investors in the last year or two.

Dow was the first to be attacked from "within", in this case by Daniel Loeb (1, 2, 3, 4, 5 and 6). That all ended when Dow and Loeb and declared a truce just over a year-ago. In a classic case of monkey-see, monkey-do (a phrase that in this case insults monkeys, even really dumb monkeys), Dupont was then attacked from within by Nelson Peltz (1, 2, 3 and 4) before finally losing his proxy battle.

But both of these guys are still hanging around the picture, which then raises the biggest question in my mind about the merger: which activist investor will be the top dog afterwards? Everyone is far more concerned concerned about government approval for the deal, but what about the undercard: Loeb vs. Peltz? As big as this new company will be, it still will not be big enough for these two mega-egos. One of them will have to go.

My proposal: a cage match! 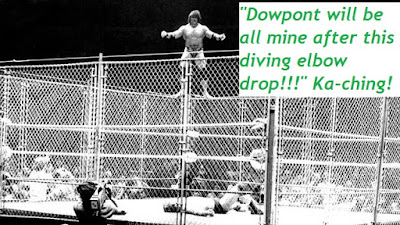 Which company had the better activist investor? This would be the once-in-a-lifetime chance to find out. Imagine the pay-per-view revenue. Wall Street bankers, financiers and countless C-Executives (especially ones previously harassed by these two) would pay thousands to watch this. Mayweather vs. Pacquiaou pulled in $410 millions - this could double that and give me enough cash that I could become an activist investor! The bookies would have Loeb as the early favorite as he is a sprite 53 years (turning 54 later this week) while Peltz is almost 20 years his senior, but when big money like this is at stake, these guys would be as ferocious as 2 emaciated tigers fighting over a fattened lamb.

"Grace, get me Loeb on the phone right away. Oh, and start dialing up that Peltz guy too. We're going to do lunch..."