There's something Fishy about so much Plastic in the Oceans's future

A long time reader of the blog, Alan Blayney, first brought to my attention the "splashy polymeric headline of the day" (his words, not mine) about the report released by the World Economic Forum/Ellen MacArthur Foundation (WEF/EMF) regarding ocean plastic. It's been all over the news, usually under the headline of how by the year 2050, plastic in the ocean will outweigh the fish.

You can read a summary or the full report if you so desire, but I really would recommend against it. I found it very difficult to go any further than 2 sentences without grunting, slapping my head, rolling my eyes and otherwise expressing frustration. That this report took three years to put together is mindboggling. It really looks like a cut-and-paste job by a 7th grader. Seriously. While the vocabulary is well above a that of a 7th grader, the logic might even be below that level.

I cannot even begin to start with a detailed response, so let me give you a couple of high-level arguments which should be enough to support my previous comparison. 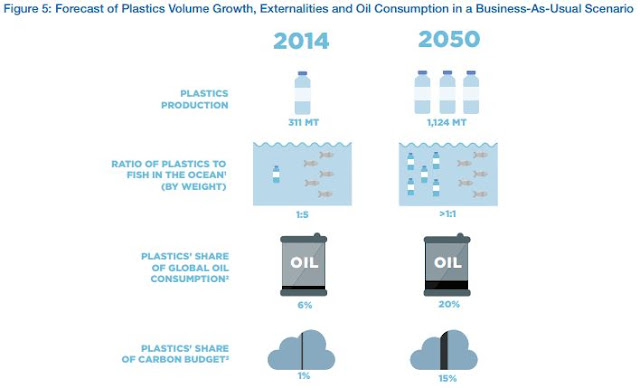 Let's just focus on the oil barrels, showing that plastics consumption of oil growing from 6% to 20%.

My fist thought was Wow! Plastics are really going to explode like that? How come no one else is expecting such a boom? So then I looked into the details. The WEF/EMF relied on an IEA report for future oil production. The IEA report is actually fairly involved and looks at multiple scenarios for future oil production, including one called "New Policies Scenario", which is described as


"The New Policies Scenario – the central scenario in WEO-2015 – takes into account the policies and implementing measures affecting energy markets that had been adopted as of mid-2015 (as well as the energy-related components of climate pledges in the run-up to COP21, submitted by 1 October), together with relevant declared policy intentions, even though specific measures needed to put them into effect may not have been adopted."

There is also a "Current Policies Scenario" which is based on, you guessed it, current policies, rather than the wishful thinking of what politicians have promised. The New Policies Scenarios then assumes that less oil will be used for energy production, hence the relative increase in the percentage of oil used to make petroleum. No boom at all. It's all just slight of hand that may or may not happen.

But even if this does happen, the question remains: so what? Let's carry out the "New Policies Scenario" to an extreme and imagine that in 2050, all energy is petroleum-free (we're all driving Teslas and heating our homes with bio-methane, etc..), in which case plastics will consume about 50% of all the petroleum extracted (the other 50% going into non-polymeric chemicals as currently happens). Why is that a bad outcome? Or even if plastics consumes 100% of the oil produced, why is that bad?

The point of this figure is to create the illusion that plastics are growing like made and the reality is that they aren't.

2) The report is largely focused on plastic packaging, although there are plenty of examples where the distinction is not clear at all. But let's focus on the packaging aspect. On page 12 of the full report is Figure 3: While you can argue with the 95% number, an even bigger counter argument can be made regarding this illustration. Consider again petroleum production. 100% of it ends up in a combustion reaction and would anyone consider this an economic loss? Or is this energy consumption a basis for having an thriving economy in the first place?

Like almost all generic complaints against plastic packaging, the arguments always focus on the "single-use" aspect of it. And why it is certainly true that most plastic packaging is not reused, by focusing on just the very last activity, the bigger picture is lost. Plastic packaging is required to meet a very large list of requirements for a number of customers, not just the final consumer. Consider the hated PET water bottle:
Consider the consequences of just one bottle failing these requirements and leaking. At the very least, that water is lost. But depending on the location of the bottle within a shipment, additional bottles may be lost if the cardboard becomes wet and weakens, perhaps even and entire pallet full of water bottles. That is a true loss of economic value.

I could go on (and on. And on. And on.) but you get the point. If you want a good laugh, look at the "moon-shot" (yes, they used that word) technical innovations that they propose on Page 26. I can't wait to get started working on that new "super-polymer". Who's in with me? Maybe a Kickstarter project. We'd only need $50 million or so.

Lastly, I found the following comment in the report to be as filled with irony as any I've ever read:

As soon as you get that 50 million dollars for your super polymer project, I'm ready to climb on board.

You bet. There is plenty of room on the Lear jet for everyone to "climb on board". I hear super-polymer development is so much easier in the South Pacific

Plastics will eventually take up the entire ocean, killing all aquatic species. We must reduce the production of plastics. The best solution is recycling. e-waste recycling in UAE is recycling company for plastics, e-wastes, batteries , cables , cans, cosmetics and more