The IUPAC ranges for atomic masses are NOT useful

While there is considerable excitement about the 7th period of the Periodic Table being completed, I've been thinking about more mundane matters about the table.

I was recently reminded that for many of the elements on the periodic table, IUPAC has assigned ranges and not specific values to the atomic masses. I wrote about this 5 years ago and haven't done anything with it since, so I took some time over break to look into the matter further. Being an organic polymer guy, I started with carbon, since on an atomic mass fraction that element makes up the largest component of most commercial polymers. The range for this element is between 12.0096 and 12.0116 amu, which is pretty tight, about 0.017% if my math is correct. This is beyond the accuracy with which we can measure molecular weights of polymers, so even worrying about the impact on the molecular weight of ultrahigh molecular weight polyethylene (UHMWPE) is not a concern.

But I was also struck by the plot at the bottom of the IUPAC page, which is reproduced here: 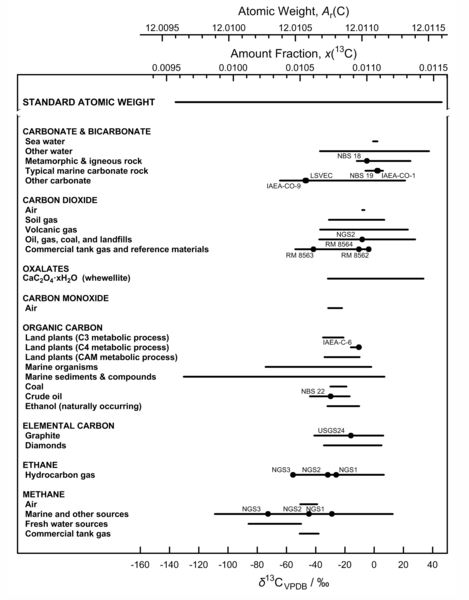 This plot shows how range of atomic masses for carbons strongly depends on the source. The largest range is in marine sediments, while other sources of carbon, such as crude oil, have significantly smaller ranges. But ironically, rather than providing justification for a range, this plot completely undermines the efforts.

I completely understand the importance for knowing these variations for fields where extremely high accuracy is needed, and I would imagine that any researcher needing to know these variations would be made aware of them very early on in their research efforts. But very few if any researchers are going to be working with carbon sources that cover this vast range. Most organic chemists are going to be working with carbon supplied from crude oil and nowhere else.

So this then begs the question of whether the ranges supplied by IUPAC are of any value. If you are like most chemists, 12.011 amu, the previous standard atomic mass for carbon is likely to be adequate enough. But if it isn't, then the new range of 12.0096 - 12.0116 amu is unlikely to be of any value either. Yes, the range is large enough to cover all the various carbon sources, but is it really necessary to have a range when a single value is sufficient for most work? And for researchers that need to understand to consider a range within their samples, any of the individual ranges in the figure above would be more helpful than to use the entire range of values supplied by IUPAC which is all inclusive.

A good chemist is going to use the range of atomic masses that makes the most sense for them. The IUPAC range is not clarifying the matter, only muddying the waters.

January 6, 2012 - Free Access to Articles in the Polymer Literature

These ranges might be useful for environmental or coal chemists, etc., who do isotopic analyses to establish sources of different materials. Of course, they would need more detailed information about delta C13 versus source than what IUPAC provides.

I'm not arguing against ranges - just this IUPAC range.

If you are in a field that is concerned about variations in atomic mass, the IUPAC range is also not of interest to you as it is too broad. It covers the high, the low and everywhere in between.

The chemistry homework solver is now available for the chemistry students with perfect details.