What is the motion of one molecule diffusing?

I survived my first semester as a professor. I really enjoyed it and am looking forward to the next semester.

The only complaint that I had was with the text. We are using "Chemistry - The Central Science" by Brown, LeMay et al. and it drives me nuts at times. Such how it only mentions 3 states of matter - solid, liquid and gas - and overlooks plasmas. Plasmas are not some exotic state of matter completely void of chemistry. Light a Bunsen burner and you have a plasma. It's possible that one or more the students has seen a plasma TV as well. To not mention plasmas is really surprising, especially since the text has no problem in mentioning more esoteric topics, such as Noble gas compounds and ionic compounds.

The section on polymers has too many mistakes to even list, but I think I did a good job of keeping those thoughts to myself.

But what really had me livid (and my students will verify this since it was I spent time in lecture on it, covered it again in the chapter synopsis and even asked about it on the final exam) is this illustration: 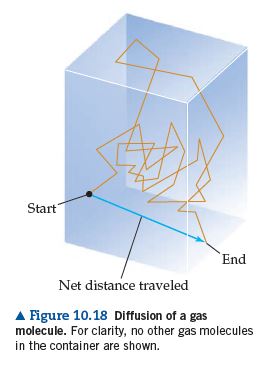 The expression "throwing out the baby with the bathwater" has never been more aptly applied.

This figure is a snippet of a random walk and as such, the molecule pictured is most likely to end up right where it started. The molecule is bouncing around at random - there are no signs to indicate which way it is suppose to diffuse and so a single molecule by itself won't diffuse. To call a random walk "diffusion" is a horrible misrepresentation of diffusion. A single molecule won't diffuse anywhere. It will just wander around at random and go nowhere.

So how can Figure 10.18 above illustrate diffusion when there is only a single molecule in it? It can't. It's not possible. Even if the other molecules were added to the picture, there would still be no diffusion without a concentration gradient. The Zen koan asks "what is the sound of one hand clapping?" to which there is no answer. This picture asks "what is the motion of one molecule diffusing" to which there is no answer, despite the authors claiming to have one.

January 4, 2021 - How will the Law and Chemistry Interact? - The Sheri Sangji Case

Email ThisBlogThis!Share to TwitterShare to FacebookShare to Pinterest
Labels: education