Long time readers of this blog know that one mistake way too many researchers and product developers make is to run poorly-designed simulations of weathering conditions in order to (hopefully) obtained faster results. But in the same way that a computer can give you a wrong answer faster, so too can accelerated aging tests give erroneous results when poorly designed and carried out.

That's why this report about the tarps used by international aid workers is so refreshing. The developer of the tarp, kept trying and failing in his design until he came up with a winner. He didn't do any of his testing in a lab however, he did it all in the real world. He needed to know how well the tarps would stand up to wind so he tied some prototypes to poles and stuck them in the beach along the coast. UV exposure? He let the tarps sit out in the sun.

Why is this so difficult for so many researchers to understand? The exposure conditions aren't as consistent as what we can create in a lab, but they are the real world and the real world is where the ultimate truth about product durability lies. I suspect in this case that since the developer was not an engineer with prior experience on weathering that he did what was logical. And the non-budget busting aspects of his testing were no doubt appealing too!

While some may think that we get so wrapped up in our instrumentation and mathematical analysis that we forget what we are ultimately concerned about, I think the real reason for missing the simple approach is ego. Since you don't need to a four-year college degree to run these simple outdoor-exposure tests, people may not look so kindly at an engineer that suggests such an approach.

For instance, when I was back at Aspen Research, we had a client that was concerned about the internal temperatures of an electronics enclosure. We offered to them 2-D equations for heat transfer that were simple to use and could predict the temperature after countless changes, but no, they wanted a bunch of 3-D FEA color images that had been run on a large computer (said images were generated in part by the same equations we had offered up). The images were useless for predicting what would occur after additional changes were made, but the client (and in particular, the management team at that client) loved the pretty pictures.

That client is no longer in business. Surprised?

While low oil prices are viewed by the majority of the public as good, the low prices are not without consequences (as is always the case with ANY economic news). Capital investments in the oil industry are down, so drillers, pipe manufacturers, steel suppliers of said pipe and so forth are seeing a similar downturn. At the other end of the...pipeline...(groan), plastic prices are down. This is generally great for manufacturers, but it is not so great for the recycling industry. With the difference in price between virgin and recycled resin disappearing, the incentives to use recycled resins are disappearing and so is the demand for recycled resins.

So a recent report that oil prices could stay low for another decade is something to take seriously. The source of the prognostication, Ian Taylor if the Vitol Group, is a respected opinionator:

"Vitol trade[s] in excess of five million barrels of crude and refined products a day, sufficient for the needs of France, Germany and Spain combined, and its views on the market [are] closely monitored."

The slowing of the Chinese economy and the shale fracking boom are to blame according to Taylor.

Surprisingly, nothing was said about Saudi output, which Saudi production, which as the linked chart shows, still remains steady. Opinions are numerous and varied as to why this remains so steady (The new Paris accord shouts one site! Fracking and Iran shouts another!) I don't have the time to assembly a list, but proposed reasons could outnumber the reasons offered for the Fall of the Roman Empire. Regardless, a quick decrease in their production could rapidly elevate prices.

As with any good (?) prediction, there are plenty of weasel words to allow for saving face. "Could", "should", "might" and "possibly" are all right up there, with dozens more waiting in the wings. So will oil prices stay low for another decade? I don't know. As Yogi Berra said (or was it Neils Bohr?), "It's difficult to make predictions, especially about the future."

Feel free to add yours in the comments section below.

Foods always make for fun and interesting rheology experiments. Witness the ongoing (and incorrect) characterization of ketchup as thixotropic [1]. Talking about viscoelastic and other complex rheological behaviors of polymeric materials really won't grab the attention of too many people, even those with a technical background. But mention the unusual flow properties of food and suddenly everyone perks up.

And so it is with a new research paper (open access with registration until 3/29/16) on the rheology of caramels and how it changes with the recipe.

It's a nice little piece of work, the most surprising result being that even though there are 6 ingredients [2] in the recipe, the rheology can be simplified using standard techniques that greatly reduce the number of variable that we need to be concerned with.

What I really didn't like about the work however, was the comparison of caramel to rubber, or specifically to what they call "Ferry 'type VII'" materials. Can I see a show of hands of how many people know what that means? Anyone? Anyone? Yep, only the SOR (Society of Rheology) members got it.

John Ferry wrote a book, Viscoelastic Properties of Polymers which is canonic. I can't imagine anyone being serious about rheology and not having read the book - it is that good. In it, Ferry shows some "ideal" rheological curves for 8 different types of non-Newtonian systems, ranging from dilute solutions of polymers all the way to highly crystalline systems. One such plot is this: 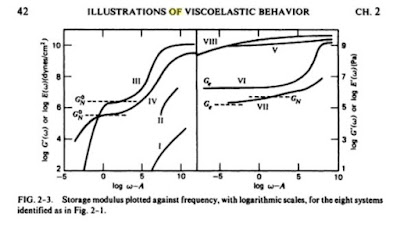 which shows the curves, designated by Roman numerals, which is where the 'type VII' came from.

But no one ever calls something a Ferry "type x" [3] material. It's not wrong, it's not incorrect, it's just improper and shows a newness to the field. And so to call a caramel as a rubber is also improper. It may have some elastic behavior that mimics rubber, but it is not a rubber. A rubber has an entirely different chemical structure that I won't go into today.

But worse yet is think of this characterization of caramel as a "rubber" falling into the wrong hands, such as those of The Food Babe. She already made name for herself by associating an ingredient in Subway's bread with also being used in yoga mats, so imagine what could happen in a case like this where the researchers already have made the connection to rubber.

When caramels are outlawed, only outlaws will have caramels. But at least we have a good understanding of how to prepare them.

[1] Well, maybe incorrect isn't the correct word, as ketchup is thixotropic, but that characteristic isn't what makes it so hard to get it out of the bottle. It's the yield stress that drives the us nuts.

[2] Or maybe you can call it 4 since 2 of them were held constant. Apparently the researchers are not familiar with Designed Experiments for formulations or similar types of analysis.

[3] Or should that be Ferry 'type X', since they are all Roman numerals?

February 18, 2013 - Viscoelasticity in the Bathroom

Those words in the headlines were part of a published interview (open access) with Palentologist Jingmai O'Conner, and as you would expect, were met with quite a bit of negative reaction from bloggers (and twitter users). I'm not going to go into a full rebuttal - others have. Zen Faulkes gives a line-by-line set of counter arguments that are excellent.

I just going to make a quick couple of points that that I've not seen expressed elsewhere:
Or did the idea that bloggers can also be reviewers never occur to her?

You can't push back the tide

Despite all the flaws in the new World Economic Fund/Ellen MacArthur Foundation report about plastic packaging in the ocean, someone is buying it - literally. To the tune of £500,000: 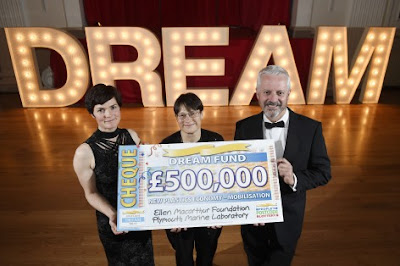 Looks like they are going to beat me to the punch in developing that new super-polymer.

It's commonly said that lotteries are taxes on stupidity, but in this case, stupidity is a tax on the lottery. There are many, many more legitimate causes than this one that can do real good with this money. But having a good PR campaign and reinforcing peoples' perceptions rather than realities goes far. Trying to fight this nonsense about plastic is like trying to push back the ocean tide.