A Plastic Object without any Temporal or Geographic Information

If you are not already familiar with the writings of Ethan Zuckerman, let me introduce you. He is a director in MIT's Media Lab and has a wonderful blog, My Heart's in Accra. He doesn't write often, but when he does, it can introduce quite an expansion into your thinking. My favorite post of his, Desperately Seeking Serendipity was how I was first introduced to his work. 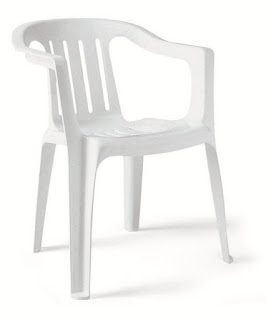 I wish I had found his blog earlier since just a month before that post, he had written about white Monobloc chairs. And as expected, he had an unusual take on them:

"Fifteen years ago, one of my jobs at Tripod was managing our abuse and legal teams. With several million webpages hosted on our service, some of them violated our terms of service and hosted pornography. That wasn’t a bit problem – we deleted pages that violated our TOS. But when we encountered pages that might be hosting child pornography, we had a more complicated procedure. We copied files to floppy disk (remember, it was 1996!) and mailed them to our regional FBI office, along with information on the IP address the user in question had signed up from.

One of the best guys on my team went to Boston for a week to train to become a “confidential informant”, so he could testify if we’d found evidence in a child pornography case that went to court. Curious guy that he was, he asked whether the information we were providing – the IP address signed up from – was helpful in building cases. Sure, he was told, but not as useful as the information in the photos. Almost every detail in a photo held information about the time and location the photo was taken. The shape of electrical outlets, labels on any consumer products, fabrics, clothing all were clues as to whether a photo was taken in the 1970s or last week, in Sweden or Schenectady.

Virtually every object suggests a time and place. The Monobloc is one of the few objects I can think of that is free of any specific context. Seeing a white plastic chair in a photograph offers you no clues about where or when you are. I have a hard time thinking of other objects that are equally independent of context. Asking friends to propose a similar object, most people suggest a Coke can… but I can tell you that Coke is presented very differently in different countries, in glass bottles as well as cans, with labels in local languages. The Monobloc offers no linguistic cues, no obvious signs that it’s been localized. Wherever you are, it’s at home."

An object so common that its presence tells you nothing.

If another such object exists, it would have to have the following characteristics:
To the average person (including me), an AK-47 would be potentially such an object. It meets the first 3 requirements above, but it is only produced (so far as I know) by one company. That means that there likely have been small design changes over the years that can provide some clues to time. So I've struck out. Anyone else want to suggest something?

crplasticproduct use high denseness plastic material, mill up and then mix it together with color.

If somebody wants expert take on the main topic of blogging next I advise him/her to go to this site, continue the fussy job.crp adirondack chairs