Here's a fun video with some Orbeez added to a hot fry pan. I can't find an exact description of what Orbeez are, although they are a water-swellable polymer so they must be crosslinked. However, they are not the usual superabsorbant polymer (SAP) or polyacrylamide. More on that in a minute. First, the video:
As I said above, the chemistry of Orbeez is clearly not that of an SAP or a polyacrylamide. Similar "toys" made from those compounds, such as Waterbalz have been pulled from the market after they caused internal obstructions from children swallowing them. Orbeez have been allowed to continue being sold, largely because research has shown [*] that their swelling in water and gastric fluids is so much less. What I find most interesting is that Orbeez swell to the greatest extent in vodka. Vokda is less polar than water and so the base polymer must be less polar too, or at least have fewer options for hydrogen bonding. This also makes them inherently safer - at least from an ingestion viewpoint - as long as you aren't drinking straights shots of Stolichnaya.

The videomaker states that the activity is a result of the Leidenfrost effect, although strictly speaking, that is highly unlikely since the temperature of the pan's surface was so highly uncontrolled. Film boiling, such as was observed here, is actually a fairly complicated affair. Here's a plot showing all the different boiling regimes that can occur with water in an open pan: 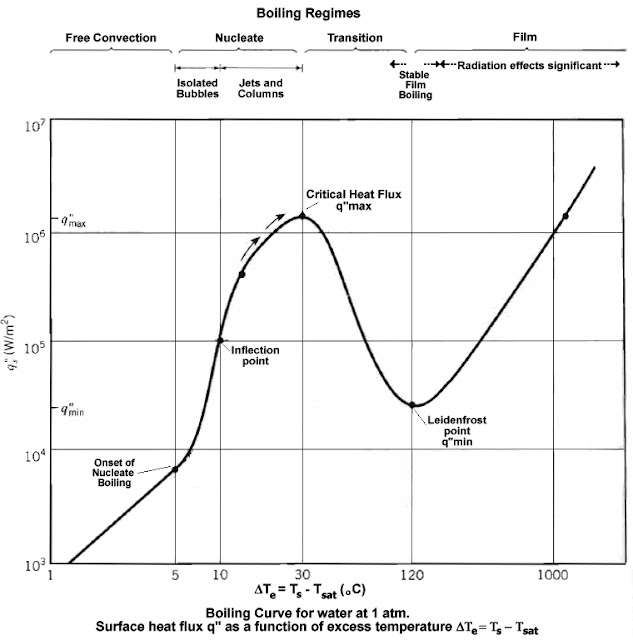 The Leidenfrost effect and film boiling are visually similar, but as you can see from the curve, the amount of heat transfer can be drastically different (that is a logarithmic y-axis after all). And as I mentioned earlier, the fact that the excess temperature of the pan was so uncontrolled, the bounciness of the Orbeez was likely the result of film boiling and not the Leidenfrost effect.

Overly pedantic? Maybe so, but maybe not. Think about this: plenty of people claim the Leidenfrost effect saves them such as when they immerse their hands in liquid nitrogen or molten lead. The effect (or a low order film-boiling effect in the immediate vicinity) certainly does. There are plenty of videos to prove it. But by such logic, the same could be tried with liquid helium and molten titanium. However, both those situations would put you firmly into the extreme right-hand-side of the boiling curve - the part where the takes off to infinity, never to return.

So be careful with the Leidenfrost effect and what you ascribe to it. It may well be film boiling and you can't tell the difference just by visual inspection. Now that you know how the two phenomenon work and how they differ, you can see that you literally could be playing with fire.

[*] The poster could use a do-over, namely so that all the plots have the same scale on the y-axis, rather than relying on their software to autoscale to the data.

June 10, 2013 - The Future of Sustainable Polymers: Bio-based Monomers or Polymers?