An Unexpectedly Quick Ending to my Summer

It’s been a pretty crazy summer for me, and it just got shortened tremendously: I landed a fulltime teaching job at a local college. Yep, no more adjunct hell.

My wife and I just would have liked to know that this was coming, as I was in the midst of a very large project at home, painting the kitchen cabinets. While I/we did know and plan for other project this summer, neither my wife nor I had any idea that we would be painting the cabinets too. It was a terrible accident. It had all started innocently enough when we decided to replace the cooktop in the kitchen island. It was original to the house and needed to go. We also realized that it would be a good time to update the surface on the island from vinyl to a “solid surface” (i.e, a quartz/polymer composite).

We picked out the new appliance and surface and had it installed. It was then that we realized that we had a major problem. The wood cabinets, which I previously liked, suddenly looked awful. My wife had wanted to paint them for the past year and I had always disagreed, but I couldn’t any longer. They had to be painted.

In oil-based paints, the polymer is dissolved in solvent. The solvent evaporates and the unsaturated segments of the polymer eventually oxidize and crosslink (cure), leaving a good tough coating. While both solvent (in a solvent-based primer) and water (in a water-based primer) start evaporating the moment you start painting, it seems like the oil-based paint's viscosity increases much more rapidly. This makes it difficult for the paint to level (i.e., for the brush or roller marks to disappear). You need to work quickly, get an even coating and then leave it alone. Water-based paints are entirely different. They are far more forgiving, better at leveling and can be easily touched up.

Painting the cabinets themselves is no small job. First, all the the doors and drawer faces come off. One side is primed and allowed to dry, then the other side is primed and allowed to dry. Then comes the paint, first on side, followed by drying time, then the other side is painted and allowed to dry. If needed, an additional coat of paint on one of more sides is needed to coat spots that were missed or dewetted. All this is done on some 8-feet long 2-by-4’s that are supported by sawhorses, meaning we were limited to about 8 linear feet of doors per batch, which isn’t very much. It was a long, project, but I was home most of the time so I was able to make steady progress.

So you can imagine the panic when I was offered the new position and a quick start date. Our kitchen looked like this: 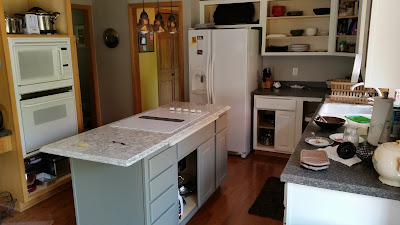 and still looks like that - halfway to nowhere. Instead of being able to paint during the week, I am now only to paint on weekends, and we already had other plans too for that time slot. The slow process has gotten even slower. Maybe I’ll be done by September, just maybe.

About the new job: it’s at Dunwoody College of Technology. The position was listed for a math/chemistry instructor (you mean a chemical engineer, such as moi?). The school is expanding and starting a bachelor's of mechanical engineering program. As part of that, they need to establish a chemistry program. And that is a big part of my new position – building a chemistry program from scratch, both course and lab.

I have prior experience in building a lab from thin air, so I’m not overly concerned, but teaching fulltime will be a new experience, guaranteed to keep me plenty busy. New classes which I’ve not taught before so I’m preparing multiple lecture notes and gathering new materials. Classes don't start until the 22nd, so thankfully I have time to get even further prepared. And thank goodness I taught last year. I have a much better feel for how much I can cover in each class period and how to keep students engaged.

Email ThisBlogThis!Share to TwitterShare to FacebookShare to Pinterest
Labels: teaching