We've had a lot of aphids attacking plants in our garden this year. My usual approach is to use an insecticidal soap that I make by diluting down from a concentrate. "Normal" soap is the sodium salt of a fatty acid, while an insecticidal soap is just the potassium salt, which means the soap is relatively safe. It also works pretty well against the critters, and clean-up is easy. But they have gotten so out of hand that instead of making it up as needed, I made up a larger amount in a spray bottle and kept it in a cabinet.

Over the weekend, I knocked the bottle to the garage floor. No biggie; I picked it up and put it back in its place. But yesterday, I noticed that the soap had leaked out of the container. I picked up the bottle and saw this: 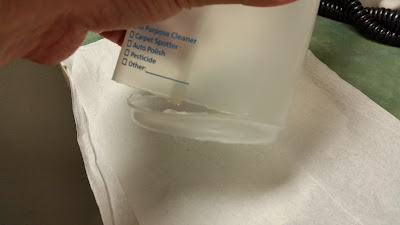 What an idiot I was. It was a polyethylene bottle with dilute soap in it and it had been stressed by the fall to the cement - a situation just begging for environmental stress cracking and that was what I got.

Environmental stress cracking (ESC) is where polyethylene and other plastics, when exposed to non-solvents and stress, break down unexpectedly. Soap and polyethylene. How can there by any interactions, especially at room temperature, especially when PE can withstand strong acids and bases, concentrated soaps and surfactants, bleach, hydrogen peroxide and more? And if you think you have an idea, then be prepared to explain why polypropylene doesn't experience ESC.

As you can imagine, I'll be on the lookout for a PP-based spray bottle for next year.

September 6, 2013 - A response to the ChemBark post (partially) about me

The tale of The Emperor's New Clothes is as much about marketing hype as it is about keeping up pretenses in a social setting. The hype over "smart clothing" is just that, but a new report (open access!) from Stanford researchers about a radiative-transparent fabric appears to offer some real potential in comfortable clothing.

As humans, we feel either warm, cold or just-right depending on the heat balance that our bodies keep with the environment. Conduction, convection and radiation all play a part, with radiation dominating at over 50% according to the researchers [*]. The radiation is in the mid-IR with a peak at 9.5 μm. Unfortunately, most of the fabrics that we wear absorb rather strongly in that region, preventing that heat loss. As a result, we feel hot and need to kick down the A/C a few degrees to compensate. Polyethylene (PE) does not absorb in that region however, and so the researchers used it as the basis for a fabric that is transparent in the mid-IR.

The researchers found that a nano-porous polyethylene (normally used in the construction of lithium ion batteries) was opaque in the visible range due to the pores scattering visible light, but still transparent in the mid-IR. The PE fabric by itself was rather weak, so they ended up creating a laminate with a coarse cotton mesh to provide a stronger fabric. Tensile testing showed the laminate to be rather brittle (only about 15% elongation before break, vs. 70% for cotton), but that can be easily addressed in the future with other constructions.

Two comments: First, the use of polyethylene as an IR-transparent clothing choice is not a new idea. It was proposed (and modeled as effective) over a year ago (and earlier research may well exist too). Second, the biggest challenge I foresee is coloring the fabric. Pigments are an option for monotonic colors (no, black is not an option since it will absorb the mid-IR), but for people that want flashy prints, it could be a real challenge.

Nonetheless, it will be interesting to see what happens to this concept. PE is plenty cheap, and so a fabric based on this could be quite affordable and all that much more valuable to people in hot areas where cooling cost can be budget busters. And the use of it in athletic wear, especially for endurance events, could prove significant as well.

September 2, 2010 - How To Have A Brainstorming Session

You can't get there from here

Being on a new campus this fall means getting lost. Finding the right building is the easy part. Finding a staircase in the building is also fairly simple. But the real challenge is deciding if it is the correct staircase.

The building that I my office is in and that I teach in is over 100 years old and was concocted in bits and pieces over time. And the result that the floor plans are pretty complicated. There are floors between floors. There are floors made of unconnected sections where you need to go to a different floor to get to the other section. Worse yet, not all staircases access all floors. It's so bad they long ago gave up on numbering the floors and named them by colors instead. And of course, the colors are NOT arranged according to the rainbow. (I think the order from bottom to top is green, yellow, black, silver, blue, red, yellow and brown, but I may be mistaken.)

But all that pales compared to this: 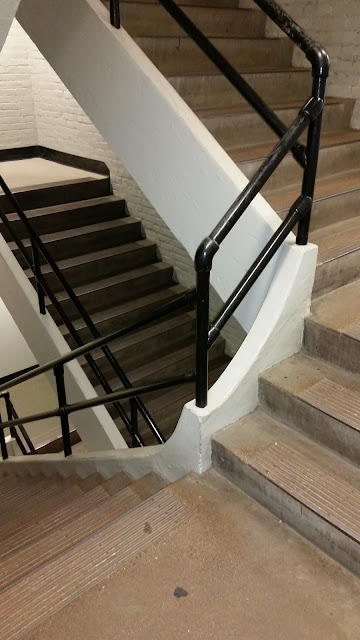 Two sets of stairs in a double helix arrangement! We're probably all use to that with escalators, but stairs? Worse, the two sets of stairs don't stop at all the floors, so you will often see students hop the handrails when they realize that the stairs they are in won't got to the floor they want, but that the other one will.

As for me, I know how to get from my office to my classrooms and back. I'll explore more in the future when I have a lunch packed, a huge bag of bread crumbs and plenty of energy.

September 1, 2011 - My Version of the Triple Witching Hour

September 1, 2010 - A New Basis for Measuring the Significance of Research